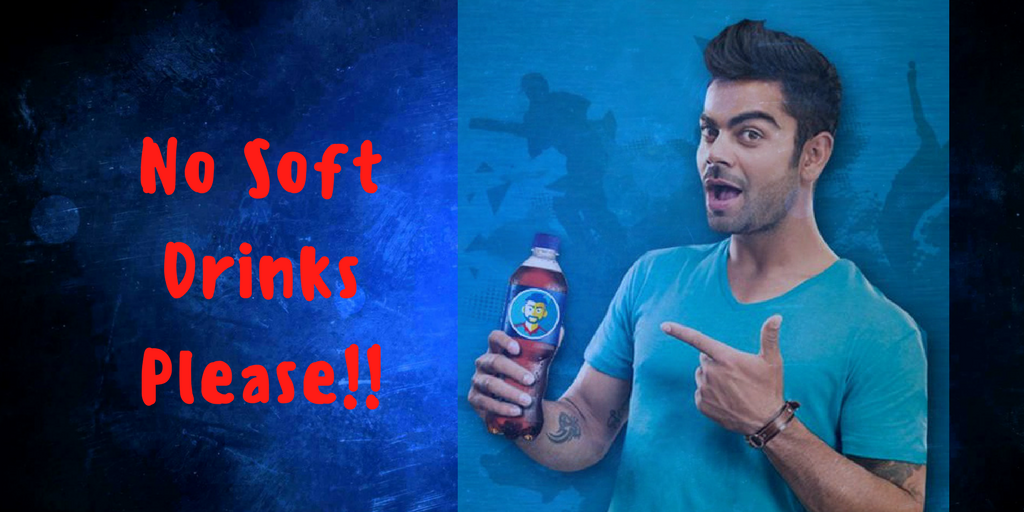 Virat Kohli is one of the fittest cricketers in the world. And the transformation is clearly visible in his physique and incredible performance on the field. Apart from his rigorous workout sessions, in several interviews, the flamboyant skipper has revealed that he has given up gluten, wheat, sweet dish, hard and soft drinks to become fitter.

He is a fitness icon for his fans and inspires millions to strive for a fit body.

Kohli’s commitment towards his own fitness and game has also transformed him into the most valuable sportsman. As per a report published by Duff & Phelps, a New York-based corporate finance advisory firm, on India’s most valuable celebrity brands; Kohli’s brand value is pegged at $92 million, second only to Shah Rukh Khan’s $131 million.

Being true to himself, Virat Kohli recently hinted in an interview to abandon endorsement of soft drink brand Pepsi in the future. Indian skipper feels that it is not right to urge people to consume something in which he doesn’t believe and is not good for health.

“Things that I’ve endorsed in the past, I won’t take names, but something that I feel that I don’t connect to anymore. If I myself won’t consume such things, I won’t urge others to consume it just because I’m getting money out of it,” he said in the Mint interview.

If it happens then Virat Kohli would be the first heavyweight brand in India to take a firm stand against soft drinks which are time and again criticized for being bad for health. Apart from Virat Kohli, Pullela Gopichand is the only other sportsperson who is against soft drink brands.

It is a very commendable move and we hope that it will inspire other celebrities as well to stop endorsing brands related to fairness cream, pan masala, and other bizarre products.