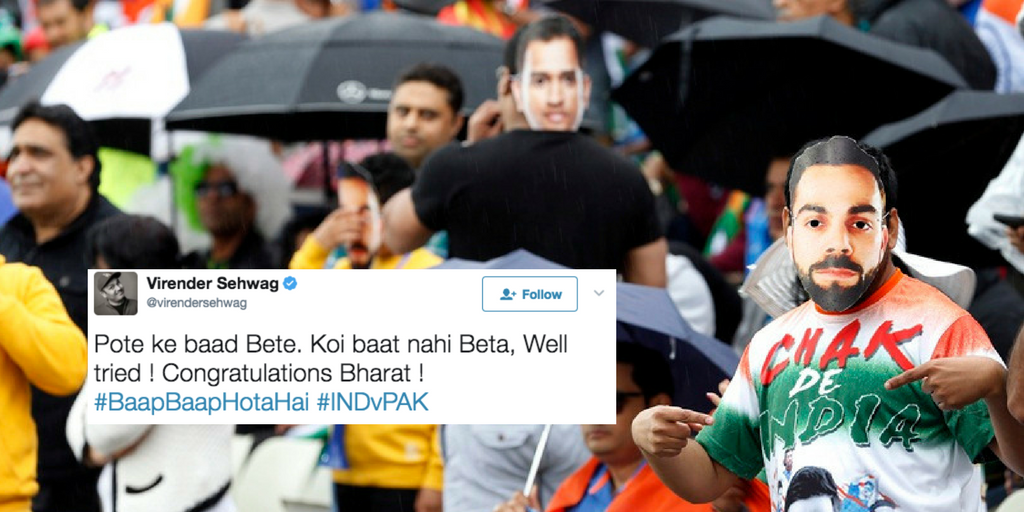 India’s win by 124 runs over against Pakistan has set the Twitter on fire. Twitterati is head over heels and has left no chance to troll Pakistan with its humor and wit. And the job is led by none other than Virender Sehwag, who is known to never mince his words when it comes it expressing himself.

Thanks to Sehwag, #BaapBaapHotaHai is trending nationally on Twitter.

When Sourav Ganguly challenged Sehwag for a 100m sprint.

Dear Pakistanis, if you want to compete, spend more time in cricket camps and less time in terrorist camps.#INDvPAK #PakvInd#indiavspak

Rest of the Twitter wasn’t behind in trolling Pakistan. Here are some of the best tweets.

2) This epic joke which never gets old.

Only improvement I have seen in Pakistan team is their Captain English. #INDvPAK #CT17 #BaapBaapHotaHai

5) This picture has instantly become the ‘nuclear bomb’ of troll army.

6) When Rohit Sharma and Shikhar Dhawan held the fort.

#INDvPAK
Meanwhile in Pakistan –
Boss, this is getting tough. Pepsi kohlo.
Can't sir.
Why?
We can't get the openers out.

Kohli waiting in the dressing room for his chance to hit these Pakistani bowlers. #INDvPAK pic.twitter.com/APwy6FQl1y

7) When the match was stopped due to rains.