#WhyIDidntReport : Sexual abuse survivors share what kept them from reporting their ordeal

A social media movement underlining the courage of sexual abuse survivors is gaining steam as a response too yet another misogynistic outburst by US president Donald Trump. 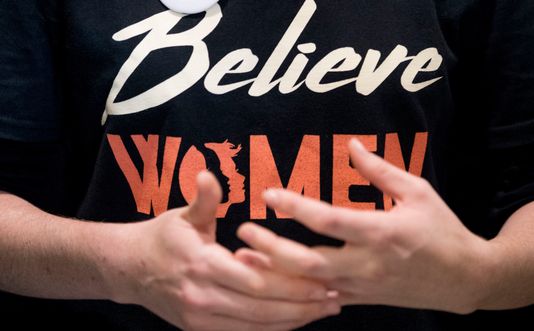 A social media movement underlining the courage of sexual abuse survivors is gaining steam as a response too yet another misogynistic outburst by US president Donald Trump. Recently, the US Supreme Court nominee Brett Kavanaugh was accused of sexual harassment by Christine Blasey Ford, an academician. She opened up about the harrowing incident in a letter where she accused Kavanaugh of pinning her on a bed, groping her and covering her mouth to keep her from screaming when they were teenagers. On Friday, Trump questioned the veracity of her accusations in a tweet, wherein he said, if the attack was as bad, she should have reported it to the authorities, then and there.

I have no doubt that, if the attack on Dr. Ford was as bad as she says, charges would have been immediately filed with local Law Enforcement Authorities by either her or her loving parents. I ask that she bring those filings forward so that we can learn date, time, and place!

This resulted in a social media movement by survivors of sexual harassment who opened up about their personal experiences of abuse and what kept them from opening up. Tweeting with, #WhyIDidntReport, these survivors underlined the difficulties women face while reporting such incidents – victim shaming, embarrassment, lack of courage, family pressures and much more.

#WhyIDidntReport When I was 17, during the summer after I graduated High School, I was supposed to be on a date and ended up the guy took me to a house and 5 guys raped me. I am 72 years old now and this is the first time I have ever spoken up. I have been too ashamed to report

#WhyIDidntReport Because I had known him for years. Because he was “sorry”. Because I was drunk. Because I was young and ashamed and felt like I had somehow asked for it even though I said NO and STOP multiple times. Because even typing this still makes me feel it all again.

#WhyIDidntReport I did, but was told that since I have curves, I must have wanted it. I've tried to hide under baggy clothes for years. 😢

#WhyIDidntReport
I was 8.
I was ashamed.
I blamed myself.
When i finally told, i was 18
& i was told by multiple people that I should have told sooner because 'what if he did it to someone else'
I later found out there were 3 more after me. & I blame myself. I'm so sorry

#WhyIDidntReport I don't want to talk about it. I don't want to be defined by it, judged because of it, seen as a victim or worse a liar or attention seeker. It's been 14 years and I'm still more afraid of people finding out than what my "friend" did to me.

Because I thought it wasn't rape if you were dating. I thought if you didn't want to have sex and he did, and forced you to anyway, that was just something that happened in relationships. #WhyIDidntReport

Countless such stories surfaced wherein survivors recollected their experiences of sexual abuse and what kept them from talking about it. According to psychologists who have been working for the cause of abuse victims, it takes a while for the abused to even process what has happened. There is an insurmountable amount of shame and embarrassment which they have to go through before they can even mention it to their close friends and family. The culture of victim blaming we have been fostering in our society can be made culpable for such latency, and hence, if someone is gathering up the courage to report their plight, the person should be trusted and believed.

Social media movements like #WhyIDidntReport can make victims feel that they are not the only ones who went through a tumultuous assault, but their pain is shared by millions like them. This inspires trust, and help them in opening up about their mortifying stories. Such movements remind victims that it’s never too late to talk about that deplorable incident since speaking about your personal struggle can inspire so many others to come out and talk about their own.

11 reasons why October is the best month of the year