Why we should bid goodbye to the term “friend zone”? 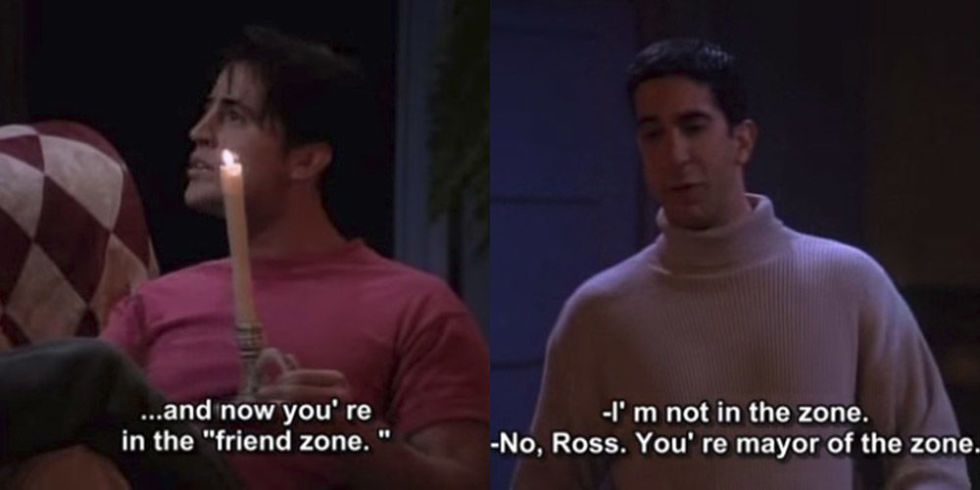 To start with, let’s explore what exactly this term means and where does it finds its origins. Friend-zone is a friendship where one of the participants is secretly hoping for things to get mushy (read:romantic) but, unfortunately the other is in no mood to budge. The term got widespread recognition through a 1994 episode of American sitcom , “Friends” where Ross Geller’s character was described by Joey Tribbiani as “the mayor of the friendzone”. From then on, this term has lingered on to popular imagination. It has been a subject of countless memes and endless coffee table discussions. I have some issues with this term and the nonchalance by which it is put to use in everyday conversations. Here, find my objections :

Although it is known to be a gender neutral term, friend zone is most popularly referred to male-female relationships wherein the female is the “unrequited love” or a friend in a saner characterization. Okay, hold on your horses people. Here, we are not saying that women are not “friend-zoned” by men. It’s just that from an early age, the sexual expression of women is an object of hidden obscurity. Girls are not supposed to say, “Hey! That guy is such an asshole. He friend-zoned me!” Guys, on the other hand, are seen bemoaning the fact that they have been friend-zoned by the girl of their dreams even after putting in all the efforts.

Like really, did someone tell them that every single relationship in this entire world should invest some degree of efforts for it to work. If you are expecting those efforts to offer a concrete return (they call it sex), it’s better to look for avenues in share market or a similar materialistic marketplace.

So, your really good friend wanting to be just friends with you is a problem? Actually, the bigger problem is the phrase “just friends” being used as a belittling term by a whole lot of guys as if it is hitting their fragile male ego in the area where it hurts the most. Isn’t friendship in itself a beautiful relationship which should be nurtured as something precious?

It is not obligated upon anyone involved in that relationship to give in and have sex with the one who considers “just friends” is an inferior proposition to make if two people are together.

All those who complain about being in the friendzone are actually dumb for thinking they have no responsibility towards their own lives. You can not just be a part of a friendship if you are feeling trapped in it or you cannot just not express your feelings to the person you like/love without being strong enough to accept the outcome – good or bad. Moreover, if you are “nice” to girl and are expecting her to fulfill your sexual fantasies, then there is something wrong with you. This cycle which could be put together as –

This vicious cycle which ultimately deduces that nice guys can’t get girls is misleading and utterly ridiculous. And you know what is fueling this misperception- this false sense of entitlement which the guys so proudly foster in to themselves which teaches them that every nice thing is entitled to a sexual favour.

This is another fallacious idea that “friend-zone” promotes. Friendships remain friendships for time immemorial. This fact is fed by way of this term. The fact is, most romantic and sexual relationships are build on the strong foundation of friendships. In fact, romantic relationships which start as friendships are happy, secure and if you are lucky, they last long enough. The simple thing here is, there are no zones in a relationship. No relationship is bound by the if’s and but’s defined by the society.

Hope, you now know why it would be perfectly legit to weed out this term from human nomenclature.

Sachin Tendulkar launched a smartphone named on his initials

Why loving someone is never about the “maybe, because”