Wait what! Sunil Grover is still a part of Kapil Sharma show?

If you are a fan of Dr. Mashoor Gulati, there is a reason for you to rejoice. Sources close to “The Kapil Sharma Show” have confirmed to news agency ANI that Sunil Grover aka Mashoor Gulati along with his co-stars Chandan Prabhakar and Ali Asgar are shooting for the show’s next episode.

As per reports, Kapil and Sunil got into an ugly scuffle while on a flight on their way back from Melbourne. Kapil Sharma faced widespread condemnation for reportedly hurling abuses at Sunil Grover and manhandling him. 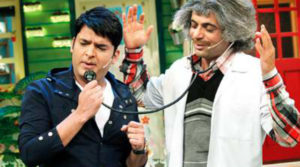 What followed were allegations, apologies and a lot of tension amongst the show’s huge fan base who wondered whether the show will retain its rib tickling comic timing. The spat tumbled onto Twitter with Kapil Sharma apologising to Sunil Grover through this tweet :

Paji @WhoSunilGrover sry if I hurt u unintentionally.u knw vry well how much I luv u. M also upset .love n regards always:)

But it seemed Sunil was not that amused by this apology. His reply looked like this

With all the public drama and uncertainty over the future of the show, this news is surely going to cheer up fans of Sunil Grover aka Gutthi aka Dr. Mashoor Gulati.

10 times Starbucks made us laugh (and cry)

This Stunning Video Of Mars Will Leave You Speechless