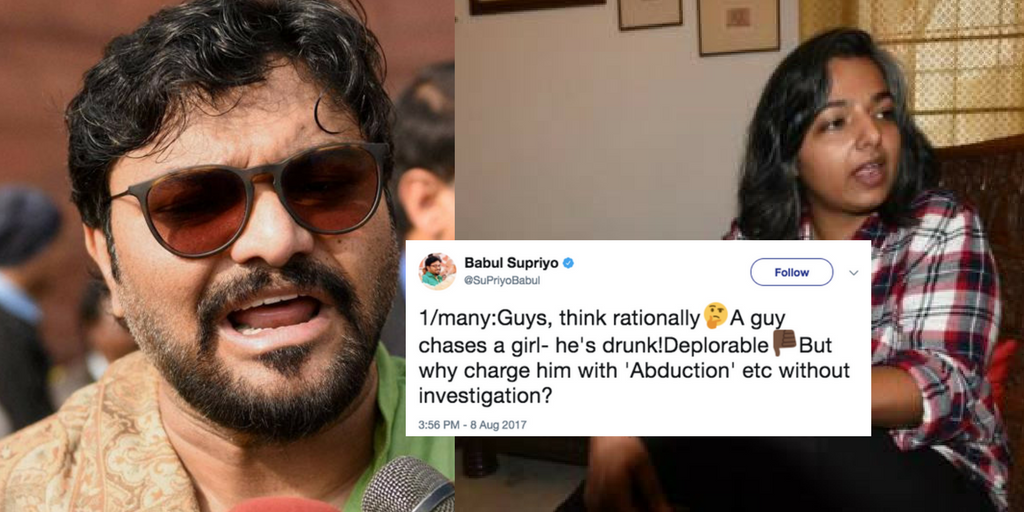 Playback singer turned Union Minister Babul Supriyo has trivialized the ordeal that Varnika Kundu went through in Chandigarh. In his tweet, he says that it was just a drunken chase and not attempted abduction. Mr. Supriyo urges everyone to think rationally, uses whataboutery by asking people why no outrage in other similar cases and then asks what is the need to highlight that the father of Vikas Barala is a BJP politician.

He finds it problematic that people are targeting the BJP Haryana president and Varnika is gaining undue attention but has nothing to say about Shaina NC, his party’s spokesperson, who tweeted a fake pic of the woman to shame her and very boldly hint that whatever she is saying is fabricated. So much for rationality!

Dada forget that he's ur party guy's son .. would u say such a thing if that girl is ur friend or known to u, get over party politics boss !

Does one need to get abducted first before filing 'Abduction' charge? #ChandigarhStalkingCase @rajnathsingh

Guys, Think rationally. A guy can sing a little & generally be a loud-mouth in television studios, Why make him a Central Minister?

Babul Da…..ei bhabe Bangali der lojja dio na…..being a decent artist, atleast you should not try to politicize everything

chasing a girl whether he is drunk or not is a dangerous thing to condone dear minister.

10 Reasons Why ‘Jab Harry Met Sejal’ is sheer waste of time and patience!

Fukrey Returns teaser is quirky, funny and carries the punch of previous movie