Tragic murder of Lt. Ummer Fayaz and the deadlock in Kashmir 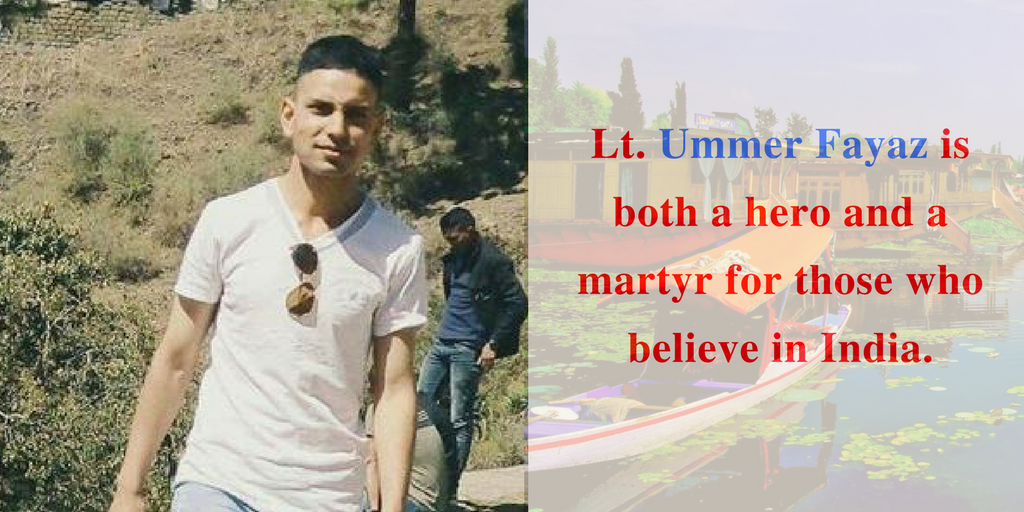 It is nothing but stupidity to try the same failed modus operandi and stratagem, again and again, expecting different results. And it is even bigger foolishness to exacerbate the original situation just because of myopic policies, lack of foresight, incorrect diagnosis and repeating the same worn out platitudes. It depicts political amnesia and the lack of both imagination and will to reach a comprehensive solution.

The truth is that apart from the hackneyed slogans of engaging with all stakeholders, a healing touch, economic prosperity and a solution within the constraints of the Vajpayee formula of Kashmiriyat, Insaniyat, and Jamhuriyat, the government has done little on the ground. And it’s ham-handed moves coupled with machismo has only deteriorated the situation and created an alienation reminiscent of the early 1990s. This is scary for everyone. But maybe not for those vested lobbies who benefit from the perpetuation of the chaotic and blood curdled status quo.

The horrific murder of 22-year-old lieutenant Ummar Fayaz has enraged the entire nation. The young army officer was abducted from a cousin’s wedding by terrorists and his bullet-riddled body was found lying on the road in Shopian. He was a young and brave son of Kashmir murdered by the ideological fellow travelers of those who threw a police van in the river last year and manhandled a CRPF Jawan this year.

All talks of ‘Kadi Ninda’ – strong censure – remain just that. Politicians condole the death of the young officer on Twitter, voice their anger against the terrorists, and tells us how much their heart bleeds for Kashmiri civilians. But that’s it. Beyond this it ends.

Kashmir is a textbook case study of political skullduggery, opportunism and knowing which side to keep greased.

The marriage of convenience there between the self-declared nationalist BJP – which is avowedly against Article 370 – and the soft separatist PDP, has disenchanted people from the democratic fold, drifted them towards the radical sections, and created a trust, credibility and legitimacy deficit.

Indian state does not hesitate in thrashing and torturing the normal foot soldier of the Azadi movement, thus alienating them further. But we have entirely different standards when it comes to the Big leaders of the Azadi cause.

SAS Geelani, Mirwaiz Umar Farook and Yasin Malik are provided security by the state, receive payments and other perks to remain mellow, and are recognized as genuine interlocutors and stakeholders in the conflict.

Why this dual yardstick? One for the common footsoldiers? And another for the leaders and ideologues?

The government has to strike at the root, and not pick up low-hanging fruits. A constituency of peace loving Kashmiris has to be built, strengthened and the Pakistan-backed separatists have to be discredited and delegitimized. They don’t budge even an inch. And engagements with them sends mixed and ambivalent signals to the Kashmiris.

A carrot and stick policy has to be devised. Development of pro-India consensus has to go along with its incentivisation and a holistic approach for social integration and long-term stability.

The murder of Lt Umar Faraz offers a striking contrast to Burhan Wani, the young commander of Hizbul Mujahideen who was shot in an Army encounter last year. Wani was lionized as the face of the Kashmiri youth. He was made into a poster boy of Kashmiri Jihadism by the extremists and fanatics. Even the delusional appendages of militancy left no stone unturned in glorifying him as a symbol of Kashmiri determination, valiance, and resistance.

This lead the ultra-nationalist and right wing lobby in India to paint all the Kashmiris with one sweeping stroke of the brush. There was no place for the reason, moderation, and nuance. The right wing trolls didn’t waste even a minute in denouncing all of Kashmiris as terrorists and making the inference that this is exclusive because of Islam, condoning all other complex factors. They got an issue to beat the common Kashmiri and the common Muslim with.

But for every Burhan Wani, there is also a Lt Ummer Fayaz. If Burhan is the hero of the extremists, militants, and jihadists, Ummer is both a hero and a martyr for those who believe in India. We have to counter falsehoods from all sides and debunk the bigotry of hate mongers who use deaths, disasters, and tragedies to ‘Other’ their fellow citizen and subject them to dehumanizing stereotypes.

Merely hollering ‘Kashmir is an integral part of India’ and harboring hateful and bigoted views about normal Kashmiris, is no nationalism.

Shahrukh completely owned this TED talk with his wit, humor and irresistible charm