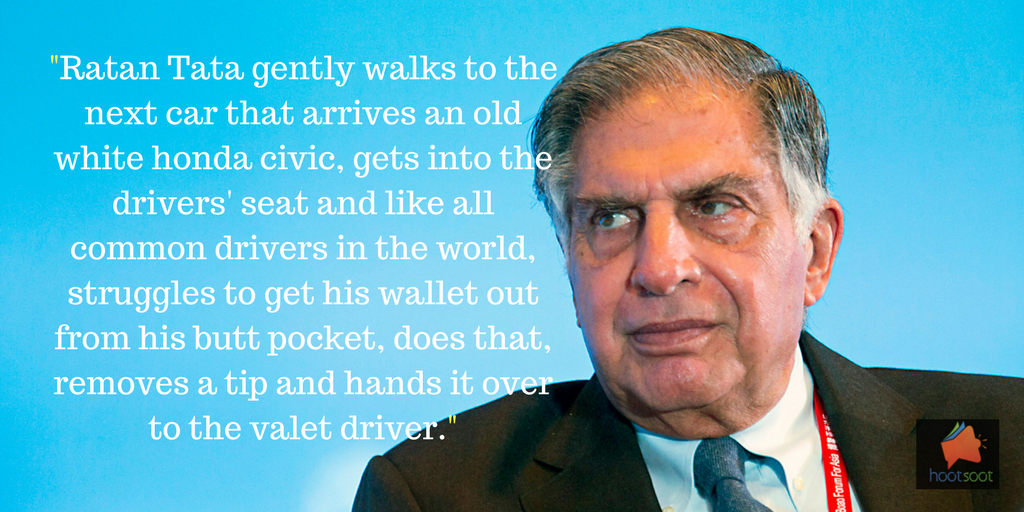 Ratan Tata has always been respected across all quarters of the society as a man of high values and integrity. Unlike other businessmen, he is never accused of running the Tata group through wrongful and unethical means. Even a glimpse of this great man in real life is not less than a pilgrimage of sorts.

“After my company’s performance, I was waiting for my car at the reception of the Taj Mahal Hotel Colaba. I have no idea why I turned around facing the hotel lobby and happened to observe a very gentle walk by a man in his late 70’s escorted by 2 management personnel. In a flash, I removed my phone and asked Neeraj please take a pic of me with him. (something I have NEVER done). I asked the personnel escorting him ‘May I have a picture with him?’, and in a very Taj eloquent tone he replied, ‘Sorry Sir its a little late’. I respected that. In that instance I observed that these Black Jacket Men are not his personal bodyguards or anything but Taj Hotel General Managers who have not been asked to do this by him, but they are just there. It was 11pm and I could sense, He is a bit tired. He spoke to the concierge staff in a very soft tone and handed over his parking ticket, I kept wondering where is his car or driver? He gently walks to the next car that arrives an old white honda civic, gets into the drivers’ seat and like all common drivers in the world, struggles to get his wallet out from his butt pocket, does that, removes a tip and hands it over to the valet driver (says thank you – assuming that as he said something to which the driver smiled). He drives off and everything at the Taj is the same as 50 seconds back! My car comes in next and I was beaming that I saw a leader whose quotes, case studies, books and actions have inspired me for more than a decade. I asked my valet driver, “is he always like that?”.

“He is amazing Sir. His car was waiting in line like others and the cops behind insisted to push it forward but he will always refuse. He doesn’t like it if we don’t check his car like everyone’s is being checked.”

He was the owner of the hotel, the former chairman of the Tata Group and India’s foremost philanthropist – Ratan Tata (79)”

Woman sued by restaurant for writing a ‘bad Tripadvisor review’

3 years of Modi Govt. | Positives and negatives; all you need to know