Popular culture have taught us that nerds have the most amazing love stories. Our very own desi nerd who has made us proud across the world has a really cute, little known love story. We are talking about Sundar Pichai, the world’s biggest search engine’s CEO. He helms Google but did you have any idea about who is at the helm of his heart?

Sundar Pichai’s love story is that of a college romance that blossomed into a lifelong love affair. He met his future wife Anjali at Indian Institute of Technology (IIT), Kharagpur. She was his classmate. They were both pursuing metallurgical engineering. Sundar, as you might be aware of from the various success stories published in the media, came from a very humble background. He lived in a small flat in Chennai, had no car to travel or a TV in the house. This minimalist beginning taught him to value life in a much profound manner. The same philosophy spilled on to his personal life as well.

Initially, Anjali and Sundar were just friends. They enjoyed each others’ company and it was just that for a really long time. As they spent more and more time together, they realized they were in love. Sundar proposed to her in the final year of their college. 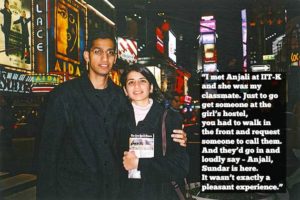 After college, things were not as rosy for the couple. Sundar left for the USA and Anjali stayed back. Since he was not financially strong during his initial days, he could not even dial her number from the US. The couple didn’t speak to each other for six long months. The distance didn’t take away their love and instead, made their bond stronger.

Soon, Anjali left for the US as well. Sundar had, till then, bagged a job with a semi-conductor firm and decided to tie the knot with his college sweetheart. Like a very decent guy, he asked for permission from Anjali’s parents and the duo got married.

It is said that Anjali is Sundar’s lucky charm. While he was working with Google, he got lucrative job offers from Microsoft, Twitter and Yahoo. But, Anjali advised him against taking up those offers. Today, we all know him as the CEO of Google, one of the world’s most valuable brands.

The couple now lives happily in Los Altos Hills and are proud parents to a boy and a girl.