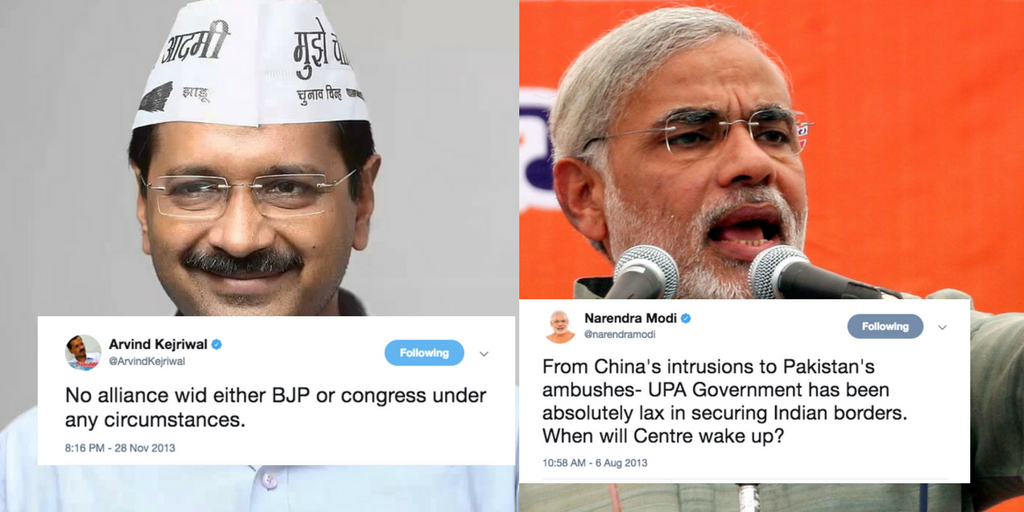 Politics is equally about persuasion, consensus building, and perception management. Before the polls, politicians promise a lot but once in power, they realize that they can not fulfill those tall claims. The chasm between reality and their claims is huge. Politicians often discern that the ground reality is rapidly changing and is not consistent with their old stance, so in order to gain more leverage they radically alter their views.

The usual resort of politicians in these cases is somersaults and a volte face U turn. U turn is an art that many of our politicians have mastered, but a few of them definitely have an extra edge over the others. Very few have consistent ideological principles these days and the expedient need to ensure political survival trumps all ideological considerations. So there are no qualms about U Turns. Also, politicians know that public memory is fickle and short lived.

Let’s have a look at the various U Turns in Indian politics:

1) While in opposition, he strongly opposed FDI in retail, but now Modijee favors it.

Congress is giving nation to foreigners. Most parties opposed FDI but due to sword of CBI, some didn't vote & Cong won through back door!

2) In Opposition, Modijee was against GST, now he calls it a breathtaking revolution in taxation. IT infra has improved in the past 3 years but how much? Debatable.

Centre's preparation on GST is inadequate. They haven't addressed state's concerns. BJP is firmly committed to reforms for India's growth.

3) During the UPA government, Modijee opposed Aadhaar card calling it mass surveillance, but now he is a strong votary of Aadhar.

On Aadhaar, neither the Team that I met nor PM could answer my Qs on security threat it can pose. There is no vision, only political gimmick

Acceptance of Aadhaar as a means of good governance & transparency is gladdening. It ensures savings to exchequer & better service delivery

4) Prior to the elections, Modijee said that there should be no dialogues with Pakistan and called for aggressive retaliation. But he halted in Lahore impromptu to celebrate the birthday of Nawaz Sharif.

Who will save us from the antics of Pakistan? Despite Mumbai attacks, Congress still asleep.

Am personally touched by Nawaz Sharif Sahab 's gesture of welcoming me at Lahore airport and coming to the airport when I left.

1) While canvassing for Delhi assembly elections for the first time, Arvind Kejriwal went lock, stock, and barrel against the then incumbent CM Shiela Dikshit. He claimed he has strong evidence against her and she will be imprisoned. However, when he became CM Mr. Kejriwal forgot everything.

@Indinomics no. We will neither support cong nor BJP

No alliance wid either BJP or congress under any circumstances.

2) Kejriwal promised that he would neither commence by an official vehicle nor reside in the government allotted CM bungalow. He did both of the above.

Bihar CM Nitish Kumar ridiculed PM Modi’s knowledge of history and called him a follower of Mussolini and Hitler, at an election rally during 2015 elections. Nitish reiterated many times how he can’t even think of going back with the BJP and it is need of the hour to build a broad secular alliance. However, just a day before yesterday, Nitish broke off his alliance with RJD and Congress in Bihar and took the support of BJP.

Any list of U Turns in Indian politics would remain incomplete if it does not include Subramanian Swamy. A former friend of Rajiv Gandhi, an admirer of Indira Gandhi,  turned a Hindutva stalwart. It would be surprising for the readers to know that one of the prominent flag bearer of Ram Mandir today, Dr. Swamy was opposed to Ram Janmabhoomi movement during the early 1990s. Till the early 2000s, he was critical of RSS and Hindutva as well.

Read this critique ‘The RSS game plan” by Subramanian Swamy.