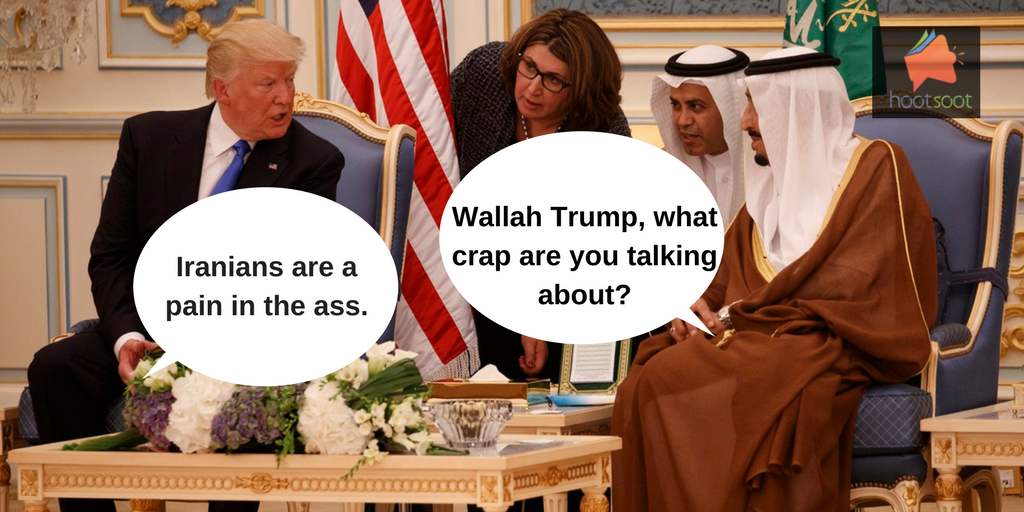 King Salman: Yes. Marhaba. The Iranians they are the source of all disruption, destabilization, and terrorism everywhere.

Trump: Iranians are a pain in the ass. Crazy fellows, no doubt. But you folks too have been troublemakers.

King Salman: Wallah Trump, what crap are you talking about? This is not your pre-election podium or White House or some deluxe suit in New York Trump Towers. This is Riyadh. Ask Jew Biradar Netanyahu he will tell you how it is imperative to contain and counter Iran.

Trump: I agree. Radical Islam is a big threat to peace, prosperity, harmony and stability of the entire world.

King Salman: Wallah Habibi, what radical Islam? We fight against radical Islam. Iran, Lebanon, and Syria follow radical Islam. Are you accusing us? Your faithful old friends. We are biggest enemies of all sorts of radicals.

King Salman: Yes Biradar. We do. All radicals – atheists, freethinkers, seculars, rationalists, heretics, women rights folks – we hate. Ours is the best and most refined interpretation of religion. And just like you, we want to make the Arab world great again.

Trump: But there is a problem. Prior to presidential elections, I said that you guys fund extremists, are a source of terrorism, and I also got into a heated Twitter spat with Prince Waleed Bin Talal.

King Salman: Oh, that’s a small problem Habibi. A peccadillo. We together will say that it’s the Iranians who are real terrorists. And don’t worry about Prince Waleed he doesn’t take Twitter seriously. We know you are our brother just like Presidents George Bush and Barack Obama. It’s all in the family, Habibi Trump.

Trump: You are a fantastic and honorable man. But there are some reports of sections of Saudi royals funding extremism in the west through madrasas.

King Salman: Trump Biradar you don’t drink. You are a teetotaler. Then how come you talking this utterly nonsense ridiculous stuff. You very well know about Fake News. Any media that says we fund extremism is Fake News brother.

Trump: But there is some corroboration. 9/11. Bank accounts. Intel trails. How money and arms are being routed to terrorist groups.

King Salman: Enough is enough. Is this the way to talk to a brother. Is this courtesy? Hope you remember our investments in the USA, the oil. And I was also thinking to place an order of new weapons worth billions. Now I think I will have to contact Biradar Netanyahu or my dear friend Mohtarma Theresa May. The Brits are such awesome people. They don’t listen to any bullcrap about us. You are disappointing me😡

Trump: No. No. I didn’t mean that. I am so sorry. I didn’t intend to hurt or offend you. Oh yeah, the investments. I thank you. And do place orders for new weapons. They will be simply the best. The Best. Bloody Iran and bloody Fake News media trying to create a rift between us brothers.

King Salman: Wallah. Embrace. There is the new polished Gold Medal for you. Our highest civilian honor.

Trump: No no you don’t have to be so formal. It’s seriously not required. I am fine without the medal.

Trump: Obama had it?

Trump: Give me the medal real fast then.

King Salman: In your honor.

Trump: Saudi Arabia is a great country. You are magnificent people. Simply superb. Just awesome. I will see to it that the Iranian thugs don’t trouble you peaceful and tolerant folks.

King Salman: Long live US-Saudi friendship. Down with extremism and terrorism. Cheers to nonviolence and peace.

Phullu movie trailer; a man trying to break taboos about menstruation in his village