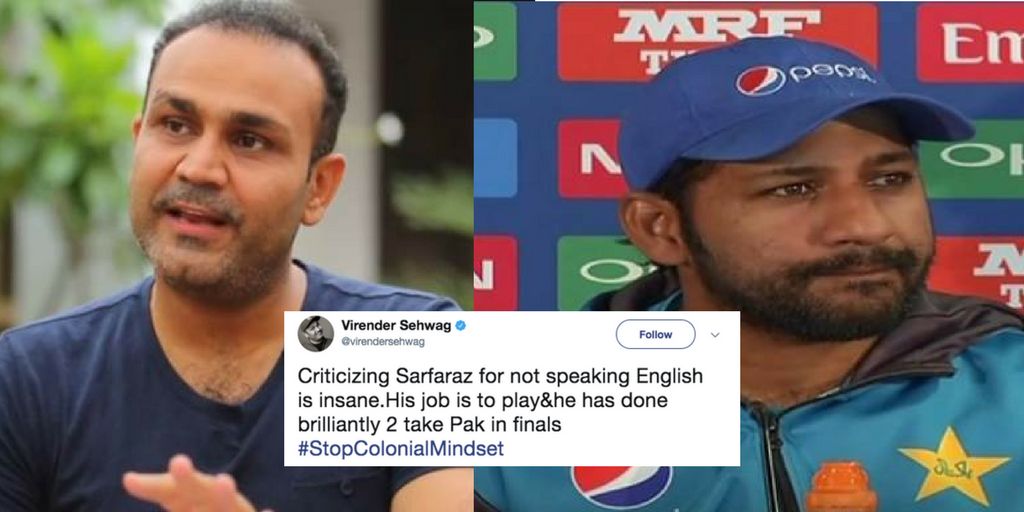 Pakistan cricket team players were and are always mocked for not being eloquent in English. The Internet is flooded with memes and videos of Pak players stammering and speaking grammatically incorrect English in after-match presentations and press conference. But recently, some support is developing for Pakistan cricket players on social media. Players’ expertise doesn’t require them to know English language and it is unfair and condemnable to criticize and mock them for being poor in English.

Now, even Virender Sehwag has joined the same bandwagon and has strongly supported the Pak skipper Sarfaraz. He appealed to #StopColonialMindset.

Criticizing Sarfaraz for not speaking English is insane.His job is to play&he has done brilliantly 2 take Pak in finals #StopColonialMindset

But support for Sarfaraz doesn’t means that he is going to become less savage against Pakistan and this tweet is the proof of it.

His job doesn't demand to know English but to beat the English & they did really well to beat a strong English side.
Kal,Hindustan Zindabad! https://t.co/cuhpjiC515

Sehwag has always remained vocal about his opinion and was even called names with filthy abuses by former Pakistani cricketer Rashid Latif for tweeting this after India won against Pakistan in the league match.