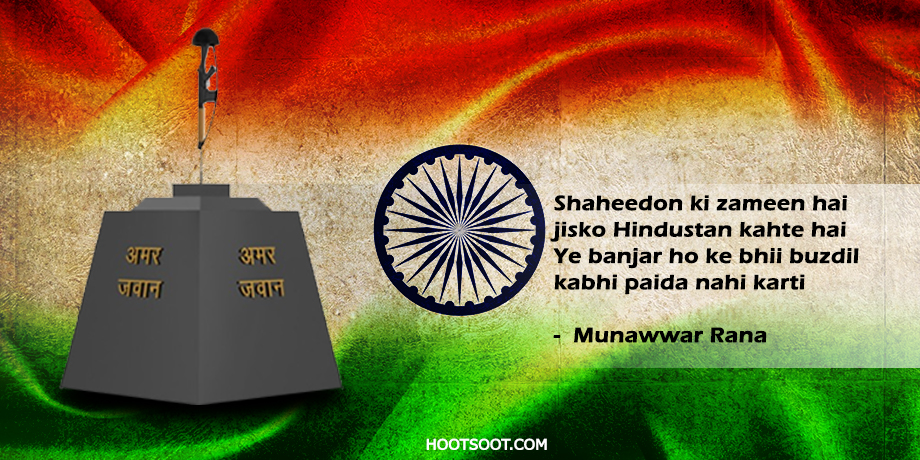 The Kargil War, fought between May and July 1999, was an high altitude modern warfare and it was for the first time that India and Pakistan fought a conventional war after both the countries became nuclear powers. The war attracted global attention as the conflict over Kashmir had reached a flashpoint. Pakistan was initially in denial but later on it was clear that it is not the handiwork of terrorists but also of the Pakistani state and military.

Pakistani soldiers and non-state-actors crossed over LOC and infiltrated in the Indian side. They had considerable advantage as they were positioned at a height and could easily shoot at the Indian soldiers. Despite all of these disadvantages, Indian soldiers fought valiantly and cleared the Kargil sector of the Pakistanis. On 26th July 1999, the tricolour was gloriously hoisted on the Tiger Hill in Kargil.

The day is commemorated as Kargil Vijay Diwas and we remember the heroes who laid down their lives while protecting the territorial integrity of their nation.

Here we present 10 heroes of the Kargil War:

Captain Kumar was a sportsman as well as a honourable officer. He showed exemplary grit and courage in the Kargil War, playing a great role in the capture of Jubar Top during the war. He died while fighting.

He was instrumental in destroying 3 enemy bunkers on Tiger Hill. Facing constant gunfire, he reached at the top of the hill, at an height of 16,500 feet, and killed 4 Pakistani soldiers. He was awarded the Param Vir Chakra for his gallantry.

Major Acharya fought bravely till the end and played a great role in capturing the Pakistani bunker at Tololing Top. His regiment suffered heavy casualties but he charged on the enemy amidst gunfire and died after the capture was successful.

Captain Batra was from Himachal Pradesh and attended the IMA Dehradun. He played a decisive role in capturing the peak point 5140 in the war. Pakistani troops fired from machine guns, but Captain Batra and his soldiers managed to destroy the post. He was injured while fighting and succumbed to his injuries. Captain Batra was posthumously awarded the Param Vir Chakra.

Captain Nair was only 24-years-old when he became a martyr. He was an officer in the Jatt Regiment. He single handedly destroyed 3 Pakistani bunkers and killed 9 Pakistani soldiers. He died when a grenade fell on him while attempting to destroy the 4th bunker. Captain Nayyar was posthumously awarded the Maha Vir Chakra.

Lieutenant Balwan killed 4 Pakistani soldiers while capturing the Tiger Hill top. He was severely injured but still fought the enemy soldiers. Seeing his indomitable courage, many Pakistani soldiers fled from there. He was awarded the Maha Vir Chakra.

The 22-year-old Captain lost his life while leading the infantry of 2nd Rajputana Rifles. He was posthumously awarded the Vir Chakra.

Major Jasrotia was part of the operation to capture Point 5410 that overlooks the Srinagar-Leh Highway. The enemy shelling lead to heavy casualties, but Major Jasrotia managed to save the lives of 6 soldiers. He perished in the combat and was posthumously awarded the Sena Medal by the Indian Army.

Caption Norngrum climbed atop the steep slopes and fired at the enemy. He was given the task of capturing point 4812. He became the first recipient of Maha Vir Chakra who hails from Meghalaya.

Captain Premraj was the officer-in-charge of the battle at Tiger Hill (Point 5140). He was married only a month before the war and was on his honeymoon when he was asked to report to his unit. Captain Premraj fought bravely but couldn’t survive due to his injuries. He was posthumously awarded the Vir Chakra.

Deadly cocktail of WhatsApp, terror and Pakistan in Kashmir