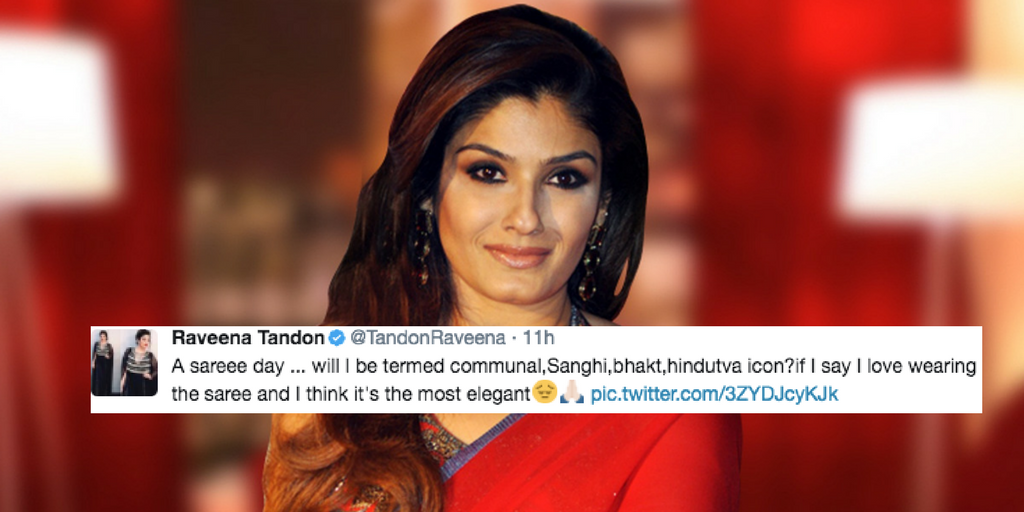 Bollywood actor Raveena Tandon has sparked a communal controversy on Twitter. She tweeted a picture of her’s in which she is seen wearing a pink saree but ironically she captioned the picture with “will I be termed communal, Sanghi, bhakt, hindutva icon?”

Reveena Tandon perhaps thinks that she will be branded a Sanghi or Communal for wearing because Saree is a Hindu dress. Her tweet has literally communalized Saree which majority of the women love to wear in India across communities and has attracted a lot of ire from Twitter users.

If only amazing looks could cancel bigotry.

Not unless u claimed its exact sari worn by sita mata on her mehendi. Also, Muslims wear sari too, get some facts.(BTW this is not trolling)

Is it OK to question your fashion sense coz that saree is ghastly?

Indira Gandhi wore saree alwaz.. Noone termed her communal or bhakt.. Wht a bullshit post Raveena ji for using it for ur political slavery

Actually the sari is a symbol for all Indians, it's beautiful. Keep your narrow minded politics out of it https://t.co/itN6QCUfJR

can someone please give raveena tandon some work to do

I mostly wear sarees, nobody has ever called me names because of it!Nor handed over an ideological cap!Wear it n enjoy the fabric!That's all https://t.co/cdaAA4U6fp

Wearing my old underwear today … will I be termed as anti national, pakistani? Or should I wear langoti to become more national?