The ‘Me too’ campaign triggered women from different spheres to come out and speak about their experiences of sexual harassment. The initiative is applaudable as it made women speak up about experiences which they would rather keep under wraps for the fear of never-ending judgements passed on by patriarchal mindsets. Alyssa Milano wrote in her tweet: “Suggested by a friend: If all the women who have been sexually harassed or assaulted wrote ‘ Me too’ as a status, we might give people a sense of the magnitude of the problem”. 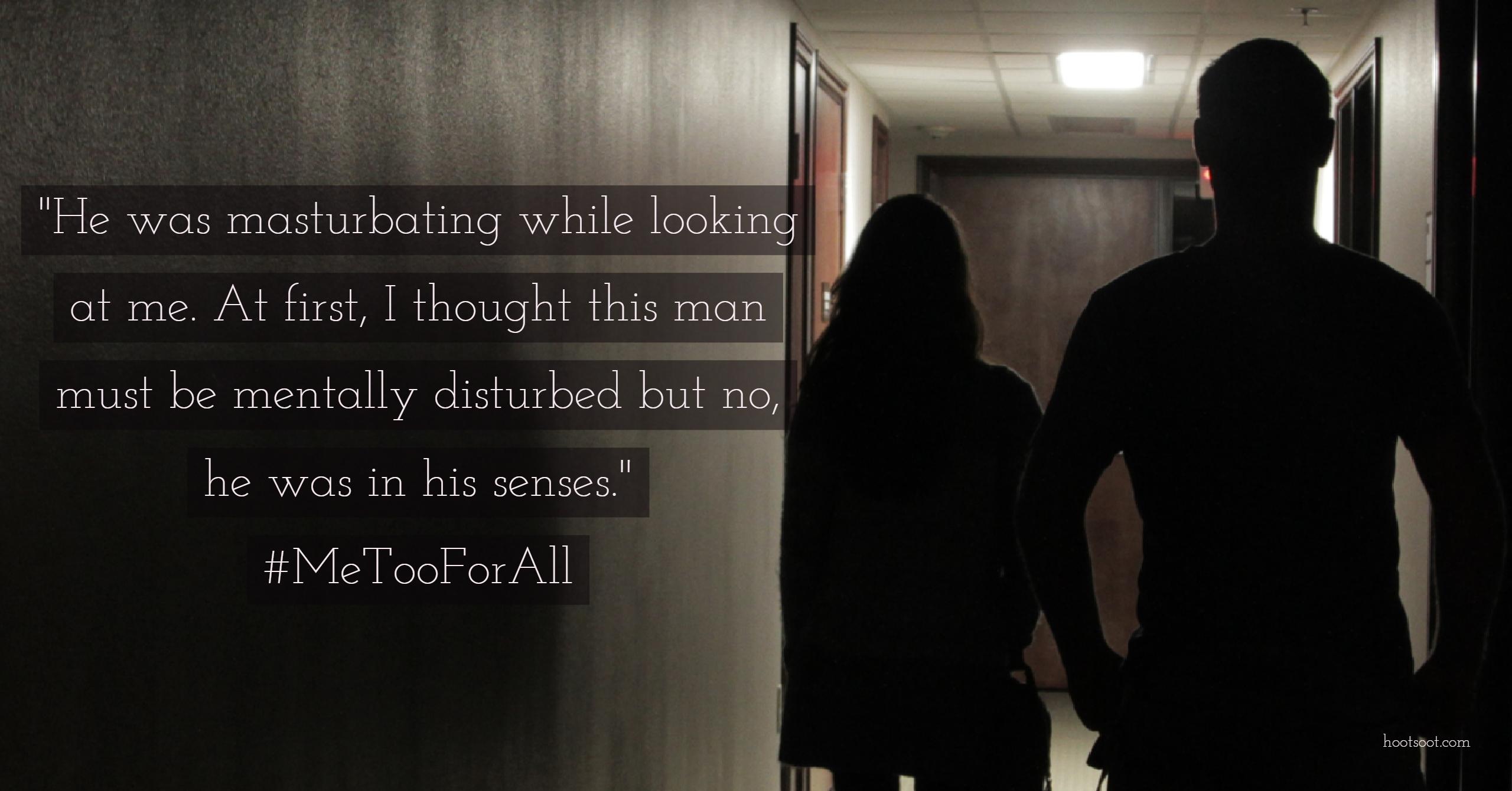 “On 15th August, my family and my father’s friend’s family were celebrating the day and we were flying kites on the terrace. I was just 11 years old at that time. We kids were on the other side of the terrace looking at kites. Suddenly, my uncle came and hugged me tightly from the back. He then turned me and rest his back on the wall and asked me to see which kite is flying the highest. But then, he did something. He tried to adjust me against his private part by grabbing my hips and started doing a little movement. I was afraid as to what to do but before I could think of something his son came up to call us and he put me aside then and there “. 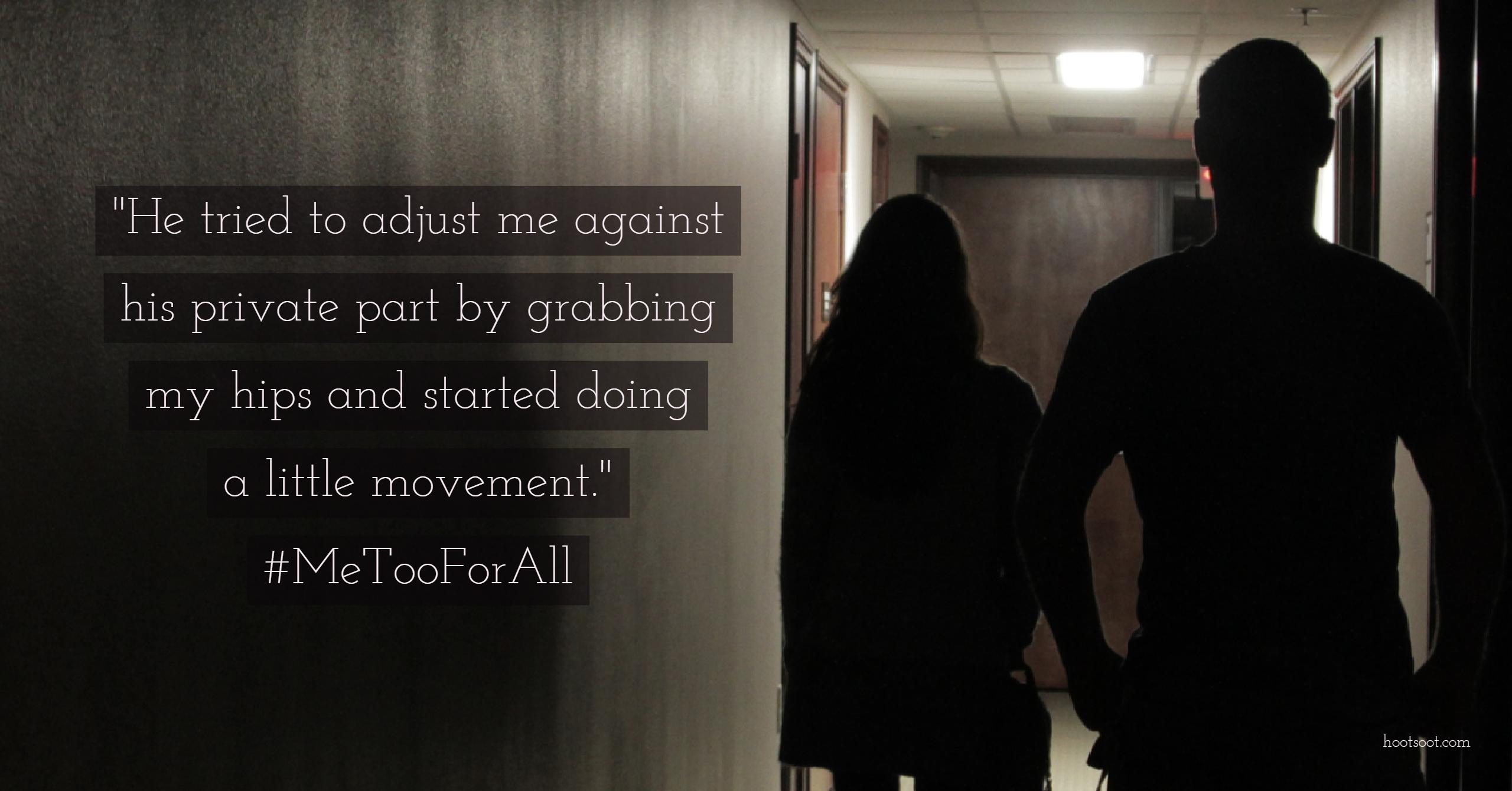 “In my first year of college, one day while travelling in metro, I encountered a man constantly pinching my butt amidst the bustling crowd. I stared at him but he still did not stop. So, I decided to take out my umbrella, strike him in the nuts and get down at the very next station. In another instance, at around 11 pm while waiting for a bus, a van stopped near me and I heard a man saying ‘utha isko’. I ran so fast with two heavy bags in my hand and entered into a store where I could then actually breathe and feel safe”. 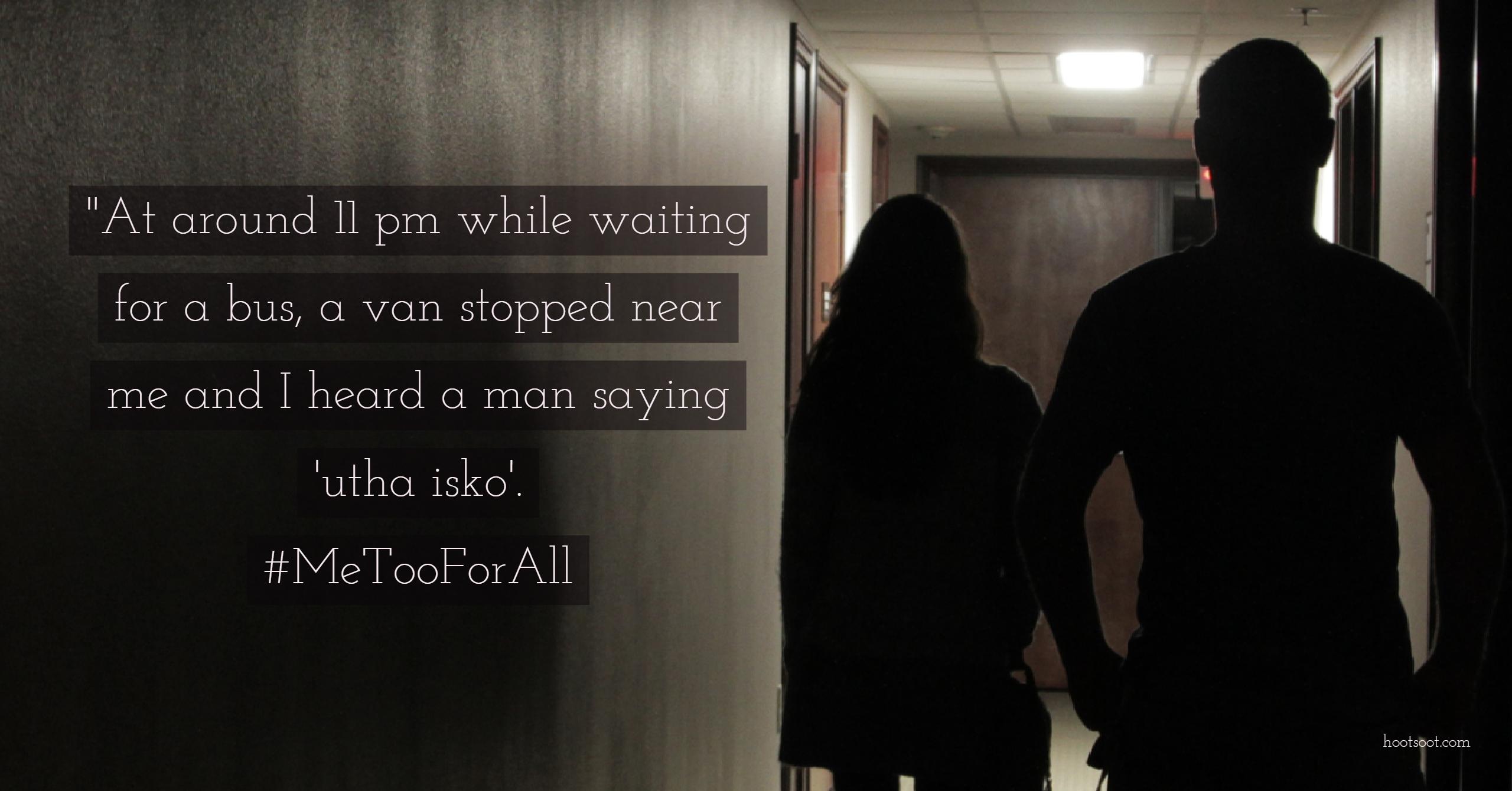 This does not end here. ‘Me Too’ stories are abound on social media. The sheer abundance of these stories points towards the magnitude of this worrying issue. But this is not just about women. It is true that women have been assaulted on a larger number of instances but amidst all this we cannot exclude other genders who have faced discrimination in their everyday routines. The instances which we read above clearly highlight the parasitic issue which still impinges upon the society on a whole.  I was 9- years-old when I was first sexually harassed. I am 22 now, and till date, I hear vulgar comments on the road either by bike riders or by auto wallas but I do possess this kind of sensibility that I cannot measure each man on the same scale or for that matter leave the experiences of men facing assault in the periphery. Our pervasive cultural understanding of men being the perpetrators of sexual assault or torture belies the reality that women are also often perpetrators of sexual victimization.

The ‘women-centric’ campaign has taken the internet by storm but for me it is a ‘Me too for all’ where in the experience of both men and women, gender non-conforming or transgender folk all holds an equal importance. When men are put through non-consensual sexual advances, it becomes especially difficult for them to speak up for fear of being castigated by the patriarchal society. Not just sexual advances, men are often falsely accused of wrongdoings, which becomes difficult to defend because of common perceptions about men being the perpetrators.

“I was in a flight from Delhi to Mumbai and there was this woman sitting next to me. We exchanged greetings. But then, something made me uncomfortable during the entire journey. As I was at the window seat, the woman started peeping through the window. In the process, she was all over me. At first, I ignored but then it happened again. The more I adjusted myself, the more her face came closer to mine. Then after a few hours, she slowly started resting her head over my shoulders. But one gets to know when things are done intentionally. I think had it been a man doing this he would have got an angry retort – ‘Baithne ki tameez nahi hai kya'”. 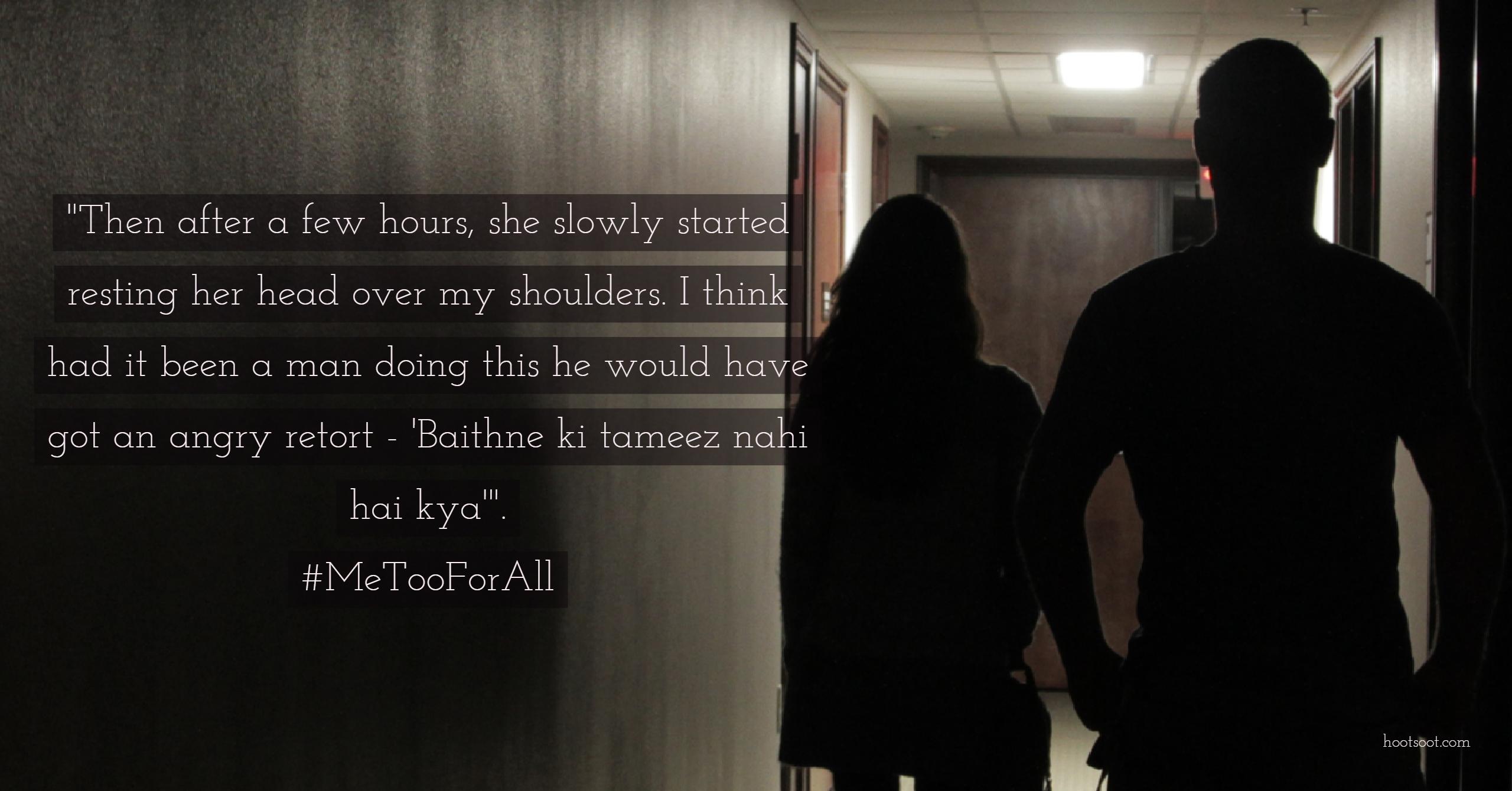 “I went over and apologized to a girl who had been misinformed by her friend that I made some cruel jokes about her which actually I never did. Till date, nobody has ever provided evidence of me saying anything negative about this person. I said that she should have asked me before perceiving things and making malicious statements about me. In reply, she said ‘I don’t think that you are even a man enough to respect anyone. Being the obtuse person, you are, I am certain you have spent three years of your college life doing nothing but objectifying women and disrespecting girls around you’. After all this, my reputation tarnished among everyone because of someone else’s false accusations. Yes, I have been falsely accused and as I am a male, everyone pointed fingers towards me really easily”. 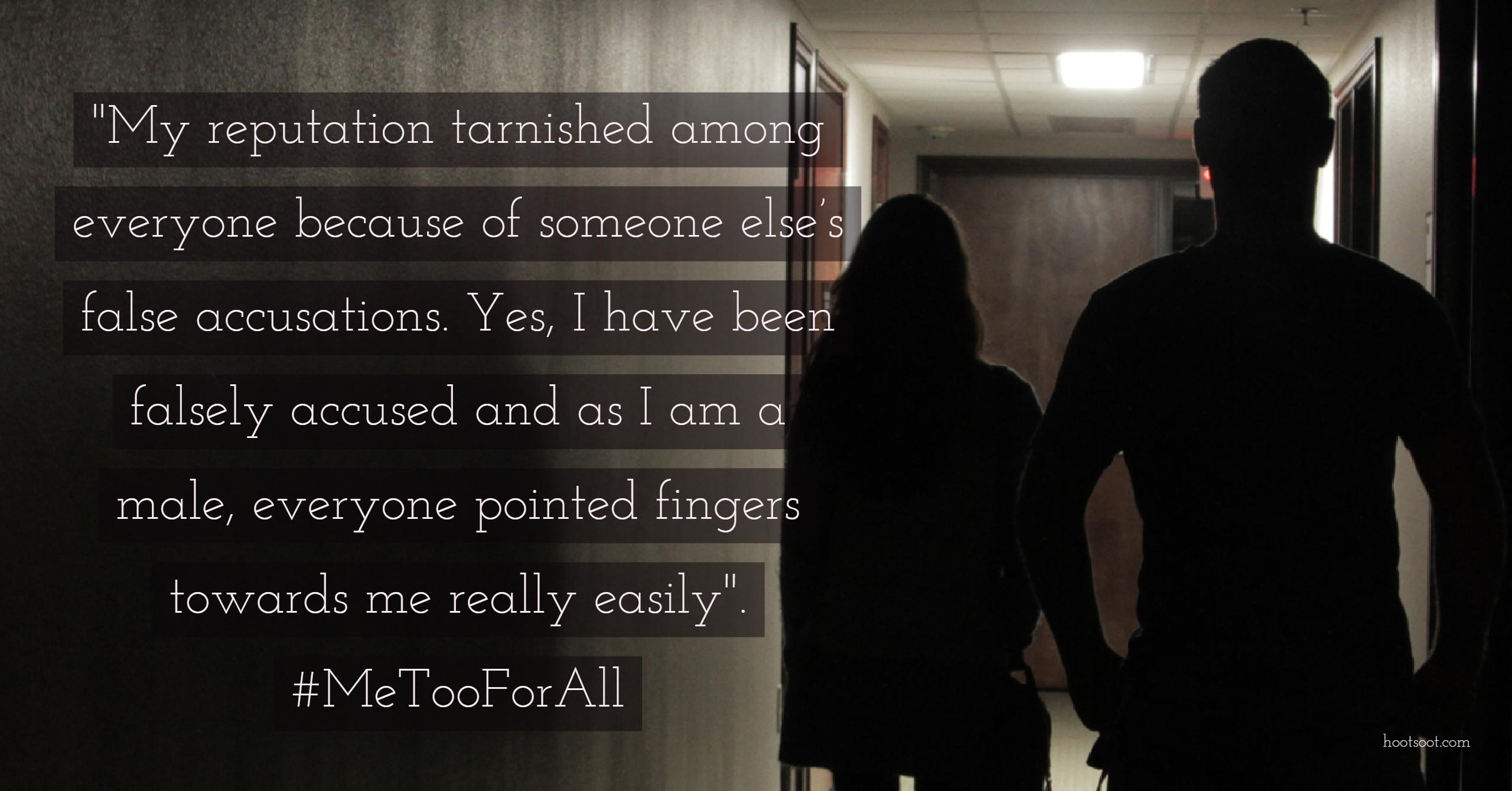 For men who have done it, it is high time to stop. Learn about how to control your sexual urges, respect the innocence of a child, be manly enough to accept your mistakes and work towards being a better human being. While on the other hand, it is our duty to not sympathise with the ‘gender card’ when played falsely by a woman. To thoroughly dismantle sexual victimization, we must grapple with its many complexities, which requires attention to all victims and perpetrators, regardless of their sex. There has to be a sense of community which needs to be fostered because it is just not about men assaulting women but it is also about women to women, women to men and men to men.