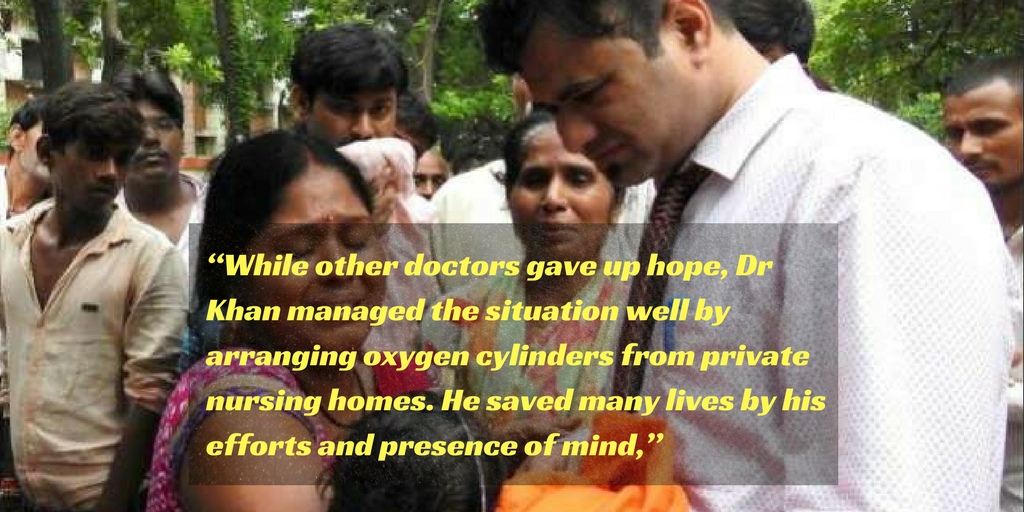 Amidst the sad tragedy at Baba Raghav Das (BRD) Medical College in Gorakhpur, where more than 30 kids died due to the inadequate supply of Oxygen; a pediatrician has emerged as a hero for saving as many children as possible by using his personal resources.

Also Read: 30 kids die in 48 hours in Gorakhpur hospital due to shortage of Oxygen supply

The head of the encephalitis ward, Dr. Kafeel Khan managed to save many lives with his efforts. As per the report published in DNA, parents of the children were quoted as saying “had it not been for Khan’s work, the number of deaths in the past 48 hours would be more than 36.”

“While other doctors gave up hope, Dr Khan managed the situation well by arranging oxygen cylinders from private nursing homes. He saved many lives by his efforts and presence of mind,” – Gaurav Tripathi, Eye Witness

After the central Oxygen pipeline started beeping on 10 August indicating the low level of Oxygen, the only way to save children in critical condition was to supply more oxygen. After being denied the supply of Oxygen cylinders by the regular contractor due to non-payment of dues hospital staff was in sheer panic. But didn’t lose hope and borrowed 3 Oxygen cylinders from his friend’s private nursing home. This way, he made four rounds in his car with 2 hospital employees to collect as much as 12 Oxygen cylinders.

This presence of mind helped the hospital buy some crucial time before a local supplier agreed at 6 am to provide the supply of Oxygen cylinders against cash payment. Here again, Dr. Kafeel Khan paid 10,000 from his own pocket and bore the expenses of transportation of Oxygen cylinders which came from Faizabad in a truck.