Internet to the rescue |wife paralysed, auto driver plies around with 2-year-old son in lap 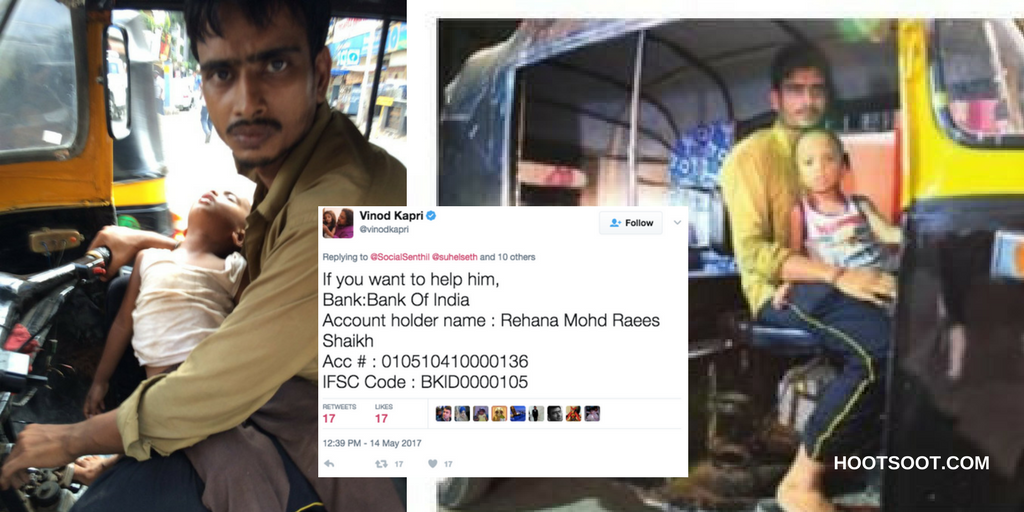 The story of Mumbai Auto driver Md Saeed is heart-wrenching and reaffirms our faith in humanity. Saeed, 26, is an auto driver in Versova suburb of Mumbai. Recently a photo of Saeed in an auto, with his 2-year-old son sleeping in his lap went viral, and lead to a huge outpouring of support and assistance.

Saeed’s wife Yasmin, 24, suffered a stroke 2 weeks ago which left her paralyzed. Saeed works hard to make both ends meet and carries his young son to work with him, while a neighbor takes care of his three-month-old daughter. He said many times he had to return home empty-handed and sleep hungry.

Film director Vinod Kapri tweeted a photo of Saeed, along with his phone number and asked everyone for the help. Since then Saeed has received many calls from good Samaritans and NGOs.

Bank officials called him to notify him that money has been credited to his account. Saaed doesn’t know who his benefactors are and who has donated how much, as he hasn’t been to the bank yet.

Some other doctors have said that they will treat his wife for free. Saeed is grateful to the people of Mumbai for their generosity and helping him during the time of distress and hardship. He also adds this is because he has never done anything wrong to anyone and has faith in Mumbai.