The year 2017 had a very dramatic start with the new Season of Sherlock starting from the 1st January, but for cricket fans, the year couldn’t have had a more dramatic start either. With the series opening new gates and careers for journalists, here we look at some of the highlights of the very controversial and very dramatic Test Series between India and Australia.

For a team which had just whitewashed England, Pune was a huge disappointment. Team India lost the toss on Day1 and had to field. Australia who was up batting posted 260 with an impressive 68 from Matt Renshaw who didn’t have a very good stomach. Mitchell Starc also contributed a 61. A 260 didn’t seem to be a very huge score considering a lineup which consisted the likes of Murali Vijay, KL Rahul, Virat Kohli, and Cheteshwar Pujara. Surprisingly the impressive lineup could score only 105, with only KL Rahul getting a score above 50 (68) and the whole team got out in less than 3hrs. The main hero for Australia was Stephen O’Keefe who picked up 6 wickets in both the innings.

For a venue which has always been known as a batsman’s paradise, the pitch for this match seemed to completely opposite to its nature. India won the toss on Day1 and decided to bat first. KL Rahul was again the only batsman who rose to the occasion and made a 90. This time, the whole team was bowled out for a mere 189. The king with the bowl this time was veteran Nathan Lyon, who took 8 wickets. When Australia came out to bat they scored a 276, with Matt Renshaw and Shaun Marsh scoring 60 and 66 respectively. The best bowling figures were by Ravindra Jadeja who picked up 6 wickets after giving away just 63 runs.

The Kangaroos had a 90 run lead. Significant contributions this time came from KL Rahul, Ajinkya Rahane and Cheteshwar Pujara. While Rahul and Rahane had scores around 50, Pujara scored an impressive 92. The Australians now had to chase a score of 184 which did not look much far fetched , but of course this was the time when the Indian bowlers came into action.

Australia were bowled out for a 112 because of what seemed to be a brilliant bowling performance. Ravichandran Ashwin picked up 6 wickets and India won by 72 runs. But obviously the stats were not the only reason this test would be remembered, who can forget the ‘Cheat Gate’ which is the first major gate after the ‘Monkey Gate’ of 2005, also there was a newspaper article which put forward allegations on Virat Kohli and Anil Kumble.

Steve Smith was judged Leg Before on a delivery by Umesh Yadav. He was about to take the DRS, which was when Umpire Nigel Llong caught him looking towards the Dressing Room. He was immediately warned and this was when Virat Kohli said that he had caught the Australian players doing this several times but the Umpires had not taken any action. Smith was later even criticized by former Aussie captain Michael Clarke for this act. On his side Steven Smith said that he had a brain fade.

Australian Newspaper, ‘Daily Telegraph’ featured an article accusing Virat Kohli, of striking an Australian official by a Gatorade Bottle, it even had an article saying that Indian Coach, Anil Kumble had gone to the Match Referee’s room after Virat Kohli was dismissed.

None of the sides were willing to keep the scales balanced any more, but then it is the unpredicatable nature of the game that makes cricket interesting. In the third Test Match both the sides had to tackle some odds. Australia didn’t have Mitchel Starc anymore due to his injury and for India it was Virat Kohli nursing a shoulder injury.

Australia batted first and piled more than 400 runs, Glen Maxwell scored 104 on his comeback, Steve Smith has been in incredible from throughout this season and scored a 178. India came out strong and batted pretty well. The partnership between Pujara and Saha didn’t seem to break any time soon, also Cheteshwar Pujara became the first Indian to face 500 balls in test cricket. India made more than 600 runs and a lead well over 150.

After losing 4 wickets, including Smith’s before lunch Australia already seemed out of the contest. This was when Peter Handscomb and Shaun Marsh, stuck to the wicket. The way both of them played, it seemed as if they were born to play in the sub-continent. Shaun Marsh later fall onto decisive Ravindra Jadeja delivery, but Peter Handscomb didn’t seem to have any intentions of going back. The match was eventually drawn due to his inning of 72 runs in which he played 200 balls and hit 7 fours.

It all now came down to the fourth and final test match. Virat Kohli who had not yet recovered from the shoulder injury had to rest and Ajinkya Rahane was appointed as the captain. Kuldeep Yadav made his debut in this test, and it would definitely be a memorable match for him.

Australia came out to bat first, Umesh Yadav provided a fiery start by dismissing Matt Renshaw early in the innings. Steve Smith who then came out to bat hit another century(111), other than him, only David Warner(56) managed to get a score above 50. After this, Kuldeep Yadav just stole the show from Australia with his impressive Chinaman, he dismissed big names like David Warner and Glen Maxwell.

Australia in total scored 300 runs in their first innings. When India came out to bat KL Rahul scored yet another half century(60), other than him, scores like 57 from Pujara, 46 from Rahane and 63 from Jadeja helped propel India’s innings to a 332.

India were leading by 32 runs and the way, India bowled now can be regarded as the best bowling performance of the season. Umesh Yadav dismissed Matt Renshaw and David Warner, while their combined score was just 14. Steve Smith was then dismissed by Bhuveneshwar Kumar when he was on 17.  Glen Maxwell was the highest scorer in the Australian innings (45).  Australia were dismissed for 137, and managed to get a lead of only 105 runs. They did manage to get the  wickets of Murali Vijay and Cheteshwar Pujara, but with the efforts of KL Rahul and Ajinkya Rahane, India was able to chase the score with ease.

This series will also be remembered for Australian media sledging which went on to compare Virat Kohli to Donald Trump and also accused him of being incapable to apologize. 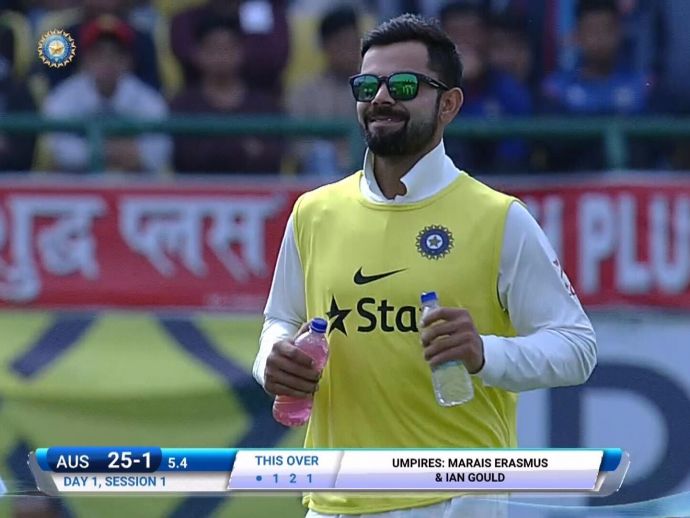 Technology and sports buff! Sarcasm is my language.