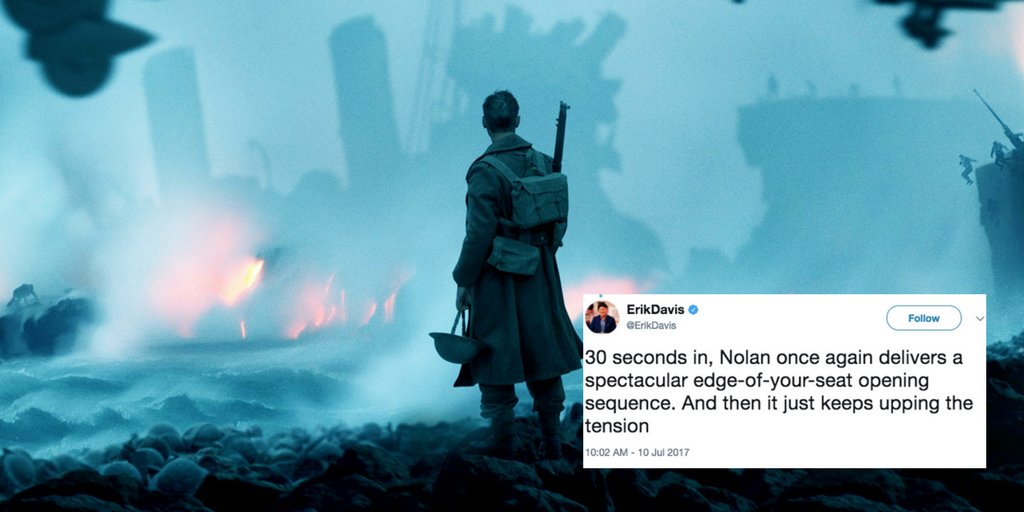 The legendary auteur Nolan, who gave us classics like Inception, Interstellar and Dark Night, needs no introduction and is amongst the greatest filmmakers in the world. Dunkirk is his latest, a historical movie based on 2nd world war slated to release on 21st July. But Warner Brothers, who have produced the film, allowed a few film critics who had seen the movie to post reviews in advance. And as expected, there was extensive praise for the director Christopher Nolan.

Film critics were in mesmerized by his direction and called him the greatest and the best. Nolan’s movies are a feat to watch. And we are sure these reviews will add to the excitement of those who are earnestly waiting for 21st July.

#Dunkirk is chaotic, relentless, thrilling & one of the most captivating movies you will see this year. A master class in craft. What a ride pic.twitter.com/7PUxG71KKZ

30 seconds in, Nolan once again delivers a spectacular edge-of-your-seat opening sequence. And then it just keeps upping the tension

From direction to editing to cinematography to score, w/ #Dunkirk Christopher Nolan proves he is one of the great filmmakers of our time

Realistic is an understatement, he went all in on this. I spoke to him about the lack of R-rated grisly warfare & why he stayed away from it

DUNKIRK is very suspenseful. My palms were sweaty almost the entire film. Not my favorite from Nolan, but still a home run. pic.twitter.com/3btS9U28Yy

Dunkirk is edge of your seat filmmaking that’s fully realized in @IMAX. Can honestly say I’ve never seen anything like it. See this in IMAX! pic.twitter.com/7F10lnBB5U

Footprints of ‘aliens’ have been found in this village of India

Going out to eat? Read this before you pay your bill