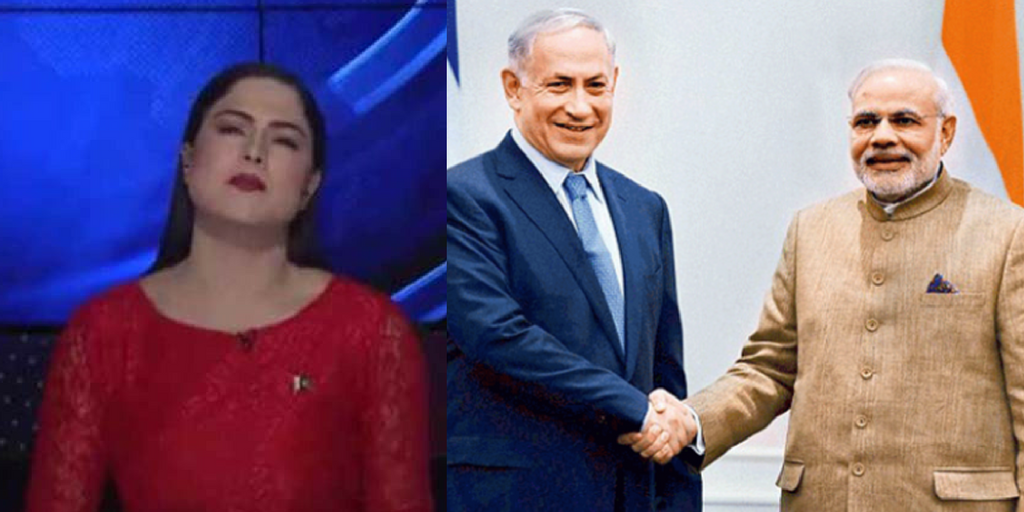 Pakistani actress Veena Malik, who has also acted in a few Bollywood movies, has now turned into a news anchor. In her new avatar, she is seen ranting against Indian PM Narendra Modi and Israeli PM Benjamin Netanyahu. Veena calls Netanyahu a big snake and Modi a serpent. She says both of them slaughter innocents in Kashmir and Palestine, and together both kill innocent Muslims.

Modi’s historic visit to Israel, the first by an Indian PM, is not for improving trade, cultural or strategic relations, as per her warped logic, but for forging an anti-Muslim alliance of hatred and bloodshed. And the two are amongst the biggest enemies of Muslims, as per the glamorous actress turned news anchor.

The actress was earlier known for her bold image and many controversies. She had a romantic affair with Pakistani cricketer Mohammad Asif, which ended after he was arrested for match fixing. After her break-up, she entered the Indian reality TV show Big Boss, and her torrid affair with Ashmit Patel grabbed many eyeballs. Her family disowned her after she did a nude photoshoot for the FHM magazine. Veena, however, alleged that she didn’t pose for the magazine and sued the magazine. She became the first actress to visit a red-light area for the promotion of her movie Zindagi 50-50.

She received severe criticism in Pakistan from clerics and religious conservatives, and then one day she shocked everyone by tweeting that her life has been completely transformed and now she won’t act in a movie which doesn’t have any social or religious message. For a mock wedding in a Pakistani show, on the channel Geo TV, she was sentenced to 26 years imprisonment for blasphemy by a court in Gilgit-Baltistan. An Islamic song was being played in the background in the mock wedding.

Mahi khel raha hai : 10 quotes about MS Dhoni that prove he is a cricketing legend