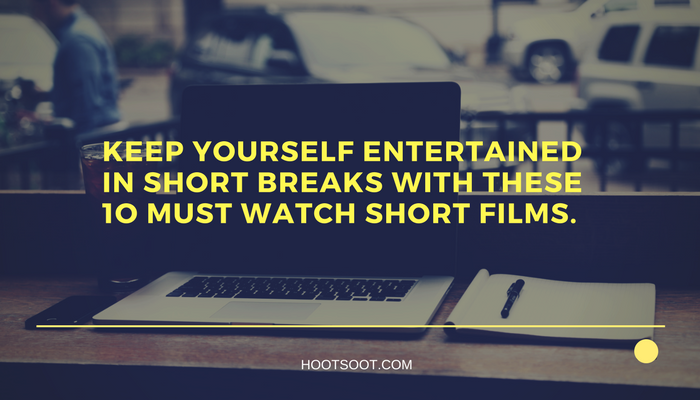 It is far more better to watch a short film stocked with unique concept and creativity than to watch a two and half hour regular Bollywood masala movie oozing with pomp but substance. There is no point in investing time in watching such repetitive mindless stuff. Even top Hindi film actors like Nawauddin Siddiqui, Naseeruddin Shah, Radhika Apte, Manoj Bajpayee, Piyush Mishra and Irrfan Khan, who know the worth of meaningful cinema are acting in short films.

These short films will give you a new perspective about storytelling. With shrewd actors, unique ideas, gripping storyline and no-non-sense editing; these short films are definitely worth a watch.

Official selection of several international film festivals and winner of National Short Film Festival Of Nagpur, 2011 is a story of small boy who finds a camera while picking garbage. Directed by Nijo Jonson, the film gives a moving account of the hard struggles faced by the poor boy and how he never fails derive happiness from them.

Irrfan Khan and Nawazuddin Siddiqui starrer bypass is a story of two muggers and a bad cop in the deserts of Rajasthan.

It is a sweet story of couple who have met for the first time for arranged marriage. The story unfolds with interesting questions and answers.

Directed by Neeraj Pandey, this short film all about the hazards of extra marital affair. Manoj Bajpayee is magical!

Piyush Mishra has spun the magic in the role of a cinema hall projector operator with his out of the box acting skills. The movie has already won several international accolades.

Featuring Kunal Kapoor and Kritika Kamra, this story has every bit of love, hate and drama.

Naseeruddin Shah and TVF Pitchers fame Naveen Kasturia will give you a fresh perspective about life and relationship.

Produced by Anurag Kashyap, it is cute story of a boy who falls in love with moon.