While the world is outraged, there is a section of men who have done nothing wrong but feeling the urge to critique #MeToo by pointing out its flaws 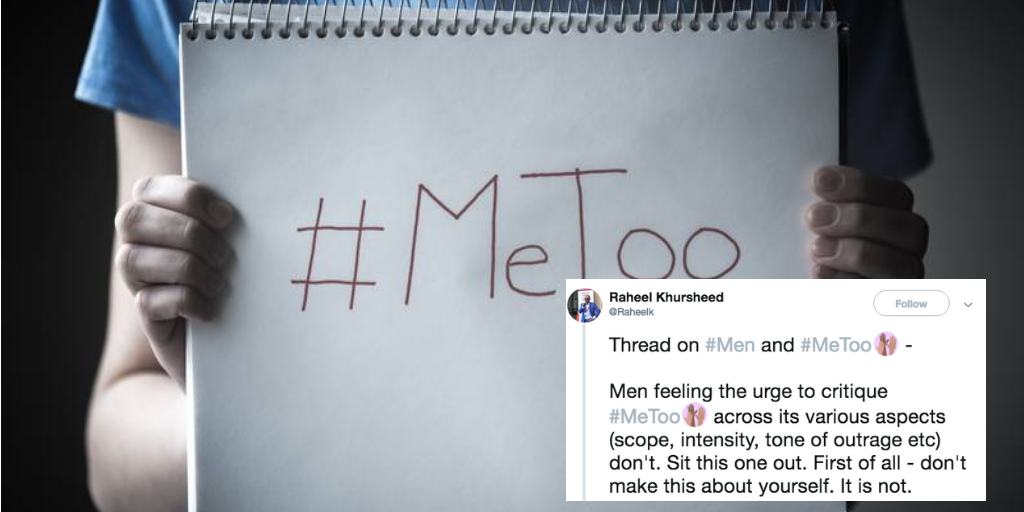 India is experiencing its #MeToo moment. It all started when actress Tanushree Datta accused actor Nana Patekar of sexual abuse and inappropriate behavior. Her statement sent shockwaves across the power centers of Bollywood. The issue snowballed into mixed support from Bollywood. While actors like Farhan Akhtar, Sonam Kapoor, and Swara Bhaskar supported Tanushree Datta; superstars including Amitabh Bachchan shied away from speaking over the subject. Shakti Kapoor even mocked the reporter over the issue by answering that he was a ‘kid’ when the incident happened.

While the world is outraged, there is a section of men who have done nothing wrong but feeling the urge to critique #MeToo by pointing out its flaws. Maybe they are unable to process the fact that such a huge part of their tribe are sexual predators or maybe overwhelmed by such a massive number of courageous women coming out and telling their horrific experiences. Or maybe just nitpicking to find flaws and reduce its credibility. Whatever it is. Doesn’t matter.

Right now, it is necessary to first expose the institutionalized misogyny of men instead of raising questions on imperfect feminism. Today is the time to hear, introspect, reflect and help society become better and safer for women.

This Twitter thread of Raheel Khursheed is spot on. This is not about you. This is about them.

Thread on #Men and #MeToo –

Men feeling the urge to critique #MeToo across its various aspects (scope, intensity, tone of outrage etc) don't. Sit this one out. First of all – don't make this about yourself. It is not.

#MeToo is only the begining of an equal rights movement that is aiming to press a giant reset of the norms across a spectrum of systemic inequal, dehumansing and violent behaviour that you haven't been at the receiving end of.

This movement, as it stands today, will cover everything that falls under the purview of law and then things that don't. Those of you who are scared and exhausted by the outings over the last 2 days, well maybe experiencing a tiny sliver of this fear will help you empathize more.

And those of you talking abt this, please don't expect awards for talking about #MeToo for 2 days? Women have been suffering this systemic violence for all of their existence and they are tired as hell. You shouldn't be tired from talking abt this for 2 days.

'The burden of the brutalized is not to comfort the bystander. If you have a critique for the resistance, then you better have an established record of critique of the oppression.' Jesse Williams said this in context to Black Lives Matter. I feel it applies to #MeToo as well.

The harrassment & assault hasn't been refined or nuanced. It has been cruel, dehumanising & relentless. Weird to expect nuance in the outing. The outing will to be messy. It is a sign of just how bad things have been for women for this long. It is a purge. It won't be pretty.

Let #MeToo become the change it is supposed to be!!