Ever wondered how is Rahul Dravid ‘off the field’? This post will answer all the questions 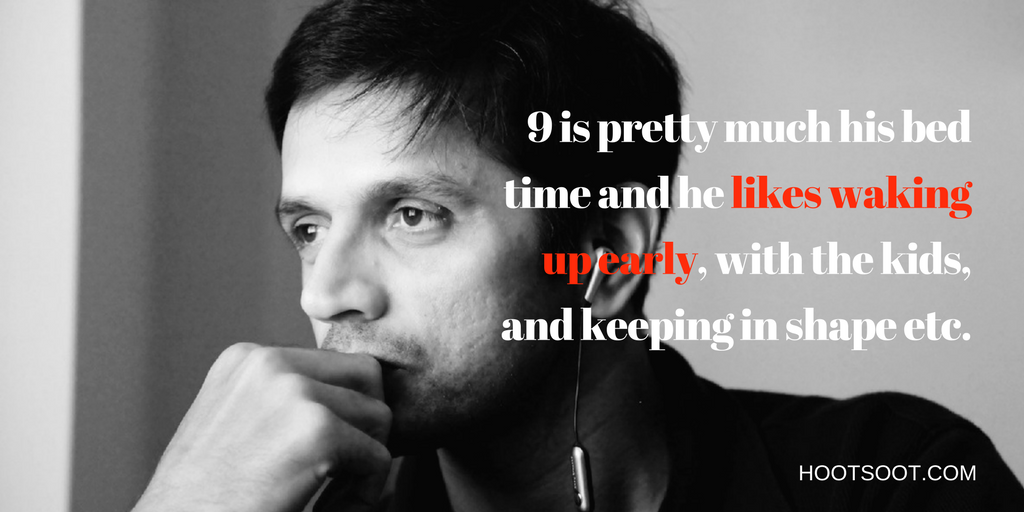 Simplicity, dedication, commitment, unmatched class, and humility are some of the adjectives which are absolutely apt to describe Rahul Dravid. Apart from contributing immensely to Indian Cricket, ‘the wall of India’ is also respected widely for his personality. The personality of an ideal player and a man who never let success climb his head,

Being a family man and reserved person, Dravid has never let his personal life come into the spotlight unlike his cricketing career. And his fans often wonder how one of the most successful international cricketers of his generation leads life off the cameras.

Recently one user asked, “How is Rahul Dravid off the field”? On Quora and this answer by a multimedia journalist, Arya Yuyutsu of ESPNcricinfo sums up his off the field life in the aptest way.

“1) He’s an early sleeper. I had to set his laptop up for a post-match hangout during the Champions’ Trophy. I reached his place at 9pm and he already seemed very sleepy. I asked him if he’d had a long day, but he said that 9 was pretty much his bed time and he liked waking up early, with the kids, and keeping in shape etc. He leads a rather disciplined life in that respect which reflects in his batting and personality.

2) He has a strong sense of loyalty. We had a shoot with him scheduled and he ruled out the weekend dates in spite of the fact that we’d figured he’d bee freest then. When I asked him if it was to spend time with the family, he said that it was actually cricket on the weekends for a while. He went on to reveal that he’d committed to playing cricket for his former club (just on the outskirts of Bangalore) for the season since they had dropped from the local first division and were struggling even in the lower league. He and Stuart Binny had decided to play for them for the rest of the season when they were in town to give them a lift. And it wasn’t like the ground was next door either. It involved a 30-40 km drive to get there, play in the sun, and get back to spend some time with his wife and kids.

3) Cares for kids. This seems pretty obvious but I didn’t quite know how to title this portion. I recently hosted an event with Rahul where he was to teach 25 under-privileged children how to bat and play the various strokes in the book. The kids were fairly young and on our part, we wanted his strokes and all on video so that we could put them up as a rather valuable series. He gaged the kids’ interest level and turned to me and said: “But why are we running through all these technical details? These kids are young and they want to play. I don’t want to bore them. Let’s shorten the batting technique chat and give them a game a bit earlier.

The professional that he is, he did take me through the batting techniques but rushed through the latter part of that to give the kids a good time. He then walked up to me and my producer and said “That latter half, we rushed it a bit for the kids. They were losing focus. I’ll do it again some other day if it’s ok. I didn’t want them to get bored.”

He then joined the kids in a short game. As per the contract, that was it. He didn’t have to do anything else apart from handout out signed bats to all of them.

But he felt that the kids would also enjoy a fun catching session which he made into a bit of a game (sort of an elimination game). At the end of it all, he told them “Kids, technique and all is great, but what’s important is that you play cricket to enjoy the game. Study hard when you’re in school and have fun while playing cricket.”

For someone like me who used to fuss so much while playing the game, this was a good reminder, putting the sport in perspective. And it gave me an insight into his thinking.

4) Won’t hurt others’ fans. It seems to be in vogue to pull people’s legs while in front of the camera and the banter and all sound fun alright. But Rahul is terribly careful about offending people and prefers to avoid any pot shot at a player so as not to hurt his fans. In a shoot with Sanjay Manjrekar, Sanjay said something that pulled on Sourav Ganguly’s leg a little with a rather innocuous and sporting comment. But Rahul laughed and asked for a re-take saying “I don’t want people in Kolkata offended. Skip that Sanjay.”

5) Diligent worker. This seems obvious but this is true away from the cricket field as well. I told him, halfway through a shoot, during a break, that when he was searching for words, he was saying “sort of” rather often. In the next couple of breaks he asked me if he’d said that again. He rarely did so for the rest of the shoot.

There’s always more that can be added. But it would be a rather tedious list of little things here and there. So I’ll leave it at a nice round number like 5 at the moment. Hope this helped you get a little window in the person that is Rahul Dravid.

I thought I should keep adding to this as I come across more. So here’s an update on Feb 28, 2014

6) Family Man. I think this is common knowledge, but he’s quite the family man. Recently we needed to do a series preview with him in our studios in central Bangalore. As ever, he agreed to come in and we asked him for an hour. He asked if 11am to noon was alright. Most ‘celebs’ come in in the afternoon since the morning is always too early (unless it’s match related stuff, of course). I asked him why he’d chosen this early time, complaining playfully that it was before my shift and he just wanted me to wake up early. He laughed and said “Actually it’s my kids man. I like picking them up. So the younger one gets done at 1 and the older one gets done later on. So I like picking them both up whenever I’m in town and spend some time with them.””

Pitting Gulzar against himself : The best and the trash