Pak journalists are also claiming that one pilot is dead and another one is being arrested by Pakistan. 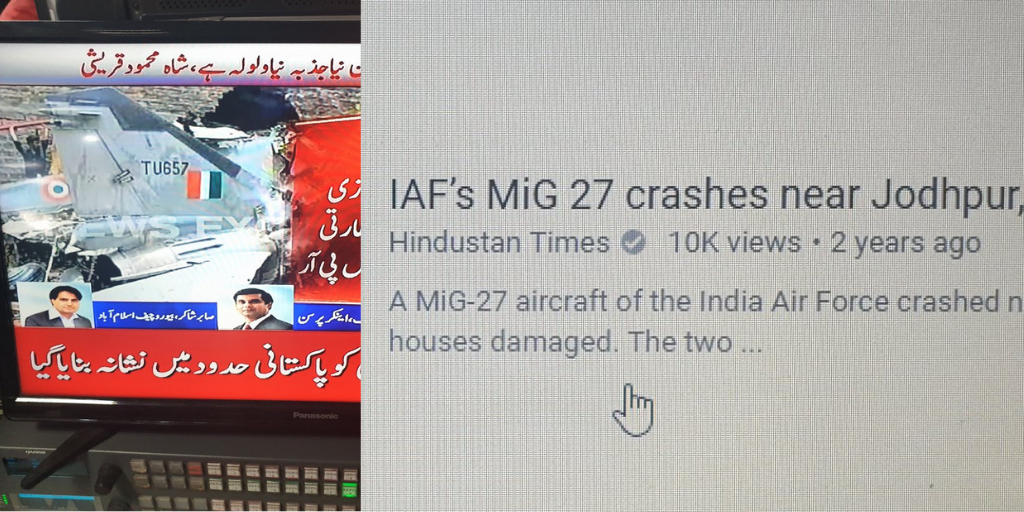 India has cornered Pakistan from all fronts including diplomatic, economic and military as a stern retaliation to Pulwama terrorist attack in which more than 40 CRPF soldiers were martyred. On February 26, 2019, at 0330 hours, Indian Air Force conducted air strikes in Balakot, Muzaffarabad and Chakoti regions of Pakistan to neutralize terrorist camps run by Jaish-e-Mohammad. It is estimated that over 300 militants are being killed in Air Surgical Strikes done by IAF.

But several Indian journalists have rubbished the rogue claims on Twitter by tweeting old news reports of 2016 and 2017.

Pakistani media has so far shown footage of a Hawk that went down in Odisha in 2016 and a MiG-27 that crashed at Jodhpur in 2017. You can verify anything from tail numbers of the planes.

BREAKING NEWS – (that is if you STILL DON'T KNOW how #FakeNews works)
There are images/videos of 'Indian' jets shot down inside Pakistan – like this one sent by @MIsmail9298
Simple google search will show you this is a crashed Mig-27 in Jodhpur in 2016.
DO NOT FALL FOR SUCH CRAP! pic.twitter.com/MAnOfsVisL

Pakistan is now literally facing the heat for supporting terrorism in the valley for years. This false-propaganda on TV news and social media is just a face-saving strategy for the Pakistan government to show a fake sense of strength to the Pakistani public.