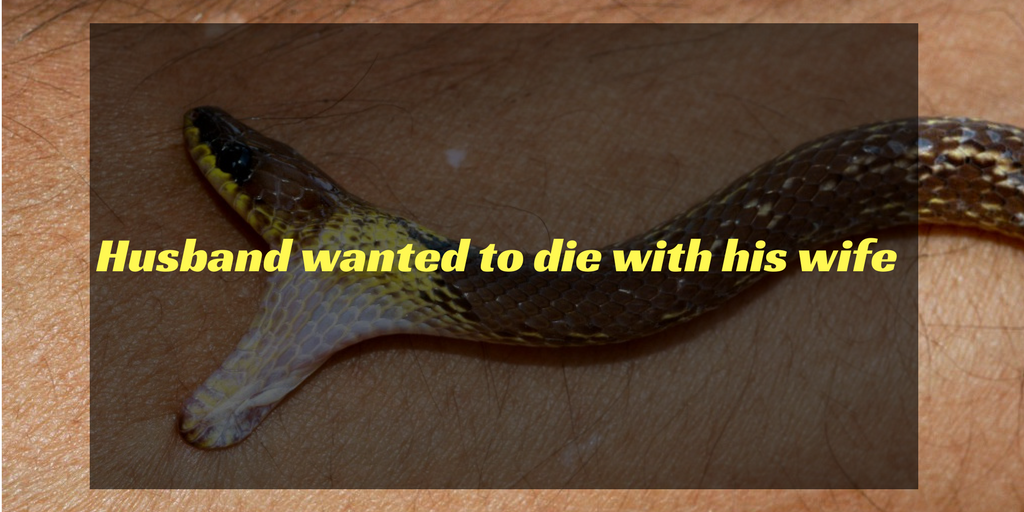 There are many tales of eternal romance, till death do us apart, united even in the hour of death, or transcending time and space to be with the beloved. It has been further glamorized by novels and movies where lovebirds who are not able to tie the nuptial knot or face stiff opposition to their romance, dying together in a desperate hope that there won’t be any separation now and they are finally a unified entity and what is called as “two souls one body” who have willingly ended their lives as both a symbol of rebellion, defiance and tragic tribute to their blossoming love.

Though this idea of “we will live together, die together” took a somewhat tragicomical turn in a village of Bihar. A man was bitten by a snake and he immediately bit his wife on the wrist because he didn’t want to die alone. The wife, however, was saved by the doctors but the husband died due to snake venom.

The husband said to his wife that he loved her immensely and wanted to lay down his life with her.

The incident took place in Birsinghpur village in Samastipur district of Bihar. Shankar Singh was sleeping on his cot when a snake bit him. In enfeebled condition he walked to his wife Amiri Devi and bit her on her wrist, telling her that they should be united in the eternal hereafter.

Both of them fell conscious and were later rushed to the local hospital. Shankar’s life couldn’t be saved but Amiri is out of danger now as per the doctor’s.

Had the wife too died, who knows the snake would have been hailed as a vehicle that guarantees lovers are united after death. Snakebite would have become the chosen form of death for couples who dream of dying together.

Like Cupid’s arrow that triggers the spark of love, snakebite could have been one that ends it in the temporal world.

Daddy looks like the best performance of Arjun Rampal till date