Arnab’s Republic Launched With An Expose On Lalu Prasad Yadav 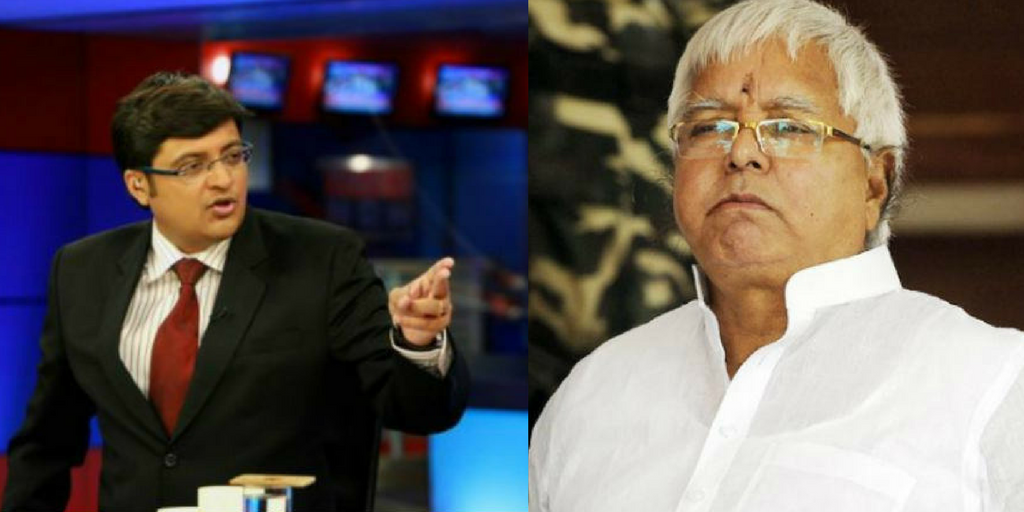 George Orwell once said, “Journalism is printing what someone else does not want to be printed, everything else is public relations.” We are not sure at all whether this quote holds valid for any single media house today, as most have their own affiliations, leanings, partisan sponsors and eventually the red lines which they can’t transgress. There is an unspoken sacrament which can not be violated. Speaking Truth to power has its own constraints, especially in India.

But in the context of what has now surfaced: that apparently 5 renowned news channels last year refused to telecast the Lalu Prasad Yadav – Syed Shahbudin audio tape, I can not help but remember what literary giants like George Orwell wrote about true journalistic ethics.

Arnab Goswami, who has launched his own channel Republic, is a brand unto himself in the domain of Indian English News channels. His flagship prime time slot on Times Now had the maximum ratings, and after he resigned from Time Now, the TRP of the channel is on a steady decline.

The newly launched free to air news channel Republic – also available on Hotstar app – leaked a 1 minute 37 seconds audio conversation between Lalu Prasad Yadav, RJD supremo and a senior Indian politician, and jailed gangster Syed Shahbudin, a former RJD MP and a mafia strongman who was once a top henchman of Lalu. The conversation is about Siwan, the turf of Shahbudin, and he asks Lalu to admonish the police superintendent there. Lalu is heard instructing his aide “Lagao SP ko” (telephone the SP)

The audio tape is Republic exclusive and expectedly it has created ripples in the realm of Indian politics. But to serious and longtime observers of politics this shouldn’t be shocking or revealing at all.

Mafia-politics nexus in Bihar and UP is firmly entrenched. And Shahbudin, who has many cases of murder and criminal intimidation lodged against him and is currently serving sentence in a murder case, has been an influential RJD member since mid-1990s.

JDU, the alliance partner of RJD in the state, has maintained studied silence on this controversy. BJP is capitalizing on the opportunity to smear the opposition as being allies of criminals and murderers.

Congrats and best wishes to Sh Arnab Goswami and his team on the occasion of launch of #Republic TV.

Republic of Arnab has exposed how Lalu is taking instructions from Dreaded criminal Shahbuddin.Will Nitish act ?

DMK, the Tamil regional heavyweight, has come to the rescue of RJD with a logic that betrays arrogance and impunity. DMK said that it’s no big deal and most political parties have links with Mafia ( true enough ). But a political party saying it stoically is rather obnoxious.

Many liberal sections are criticizing Arnab Goswami for being a BJP mouthpiece or attempting to discredit the opposition by such tactics. These folks are still living in fool’s paradises and ivory towers of their making. One can agree with Arnab on points and one can also refute him and strongly disagree with him on points. And a message is never invalidated or becomes untenable falsehood just because of the personal credentials, antecedents or ideological inclinations of the messenger. Shooting the messenger is both illogical and foolhardy.

The truth remains truth notwithstanding who speaks it, why and for what ulterior motives.

Arnab Goswami has his own characteristic style. His loud pitch, hollering, ballistic hyper-aggression, shouting down panelists, grilling them and his televised version of smug hyper-nationalism grab maximum eyeballs. The legion of his ardent followers, admirers, and his die-hard detractors both ensure his popularity. And he beats all other mainstream electronic media journalists in this hands down.

Indeed, I will say if TV journalism is an international 100-meter sprint, then Arnab Goswami is Usain Bolt in popularity, TRP, grabbing eyeballs and influencing public opinion.

Dating a Gemini? You have to see this!