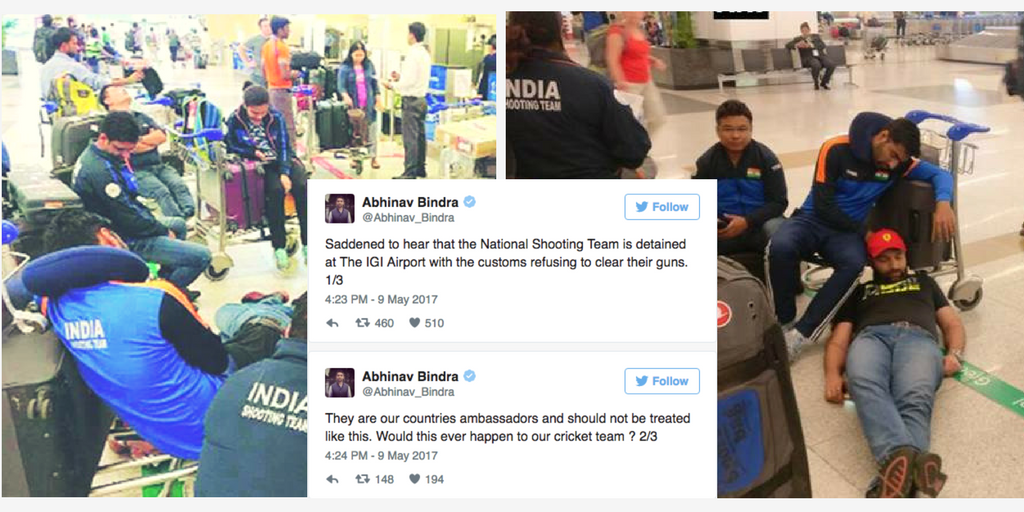 India has always been indifferent to other sports but Cricket. The kind of frenzy and love which Cricket stars enjoy is unmatched. That being said, it is not the fault of Cricket. And it is a different debate altogether.

Demeaning India’s international athletes is not a new thing. Ignorant authorities have done it in the past and they have managed to do it again. This time, thirteen members of the national shooting team were detained when their weapons were denied clearance by the officials for almost 13 hours at Delhi’s Indira Gandhi International airport. These were licensed guns with serial numbers.

These were the same guns which were allowed by the customs when the national contingent was leaving for the international tournament in Cyprus and Czech Republic.

Earlier visuals of National Shooting Team members waiting at Delhi airport: Weapons of the team were seized by Customs, were later returned pic.twitter.com/alpRqLU8Gw

Abhinav Bindra was appalled after knowing the incident and launched a scathing attack on Twitter.

Saddened to hear that the National Shooting Team is detained at The IGI Airport with the customs refusing to clear their guns. 1/3

They are our countries ambassadors and should not be treated like this. Would this ever happen to our cricket team ? 2/3

Chatted with a few athletes and the lack of support coming through from the national federation is pathetic. @RaninderSingh @TheNrai

The national shooting contingent faced this cold and absolutely ridiculous treatment when it landed home after winning 7 medals for INDIA. The least we can do as a nation is to respect these heroes who represent our country at international platforms.

Justin Bieber in India : His encounters with the coolest and the poorest