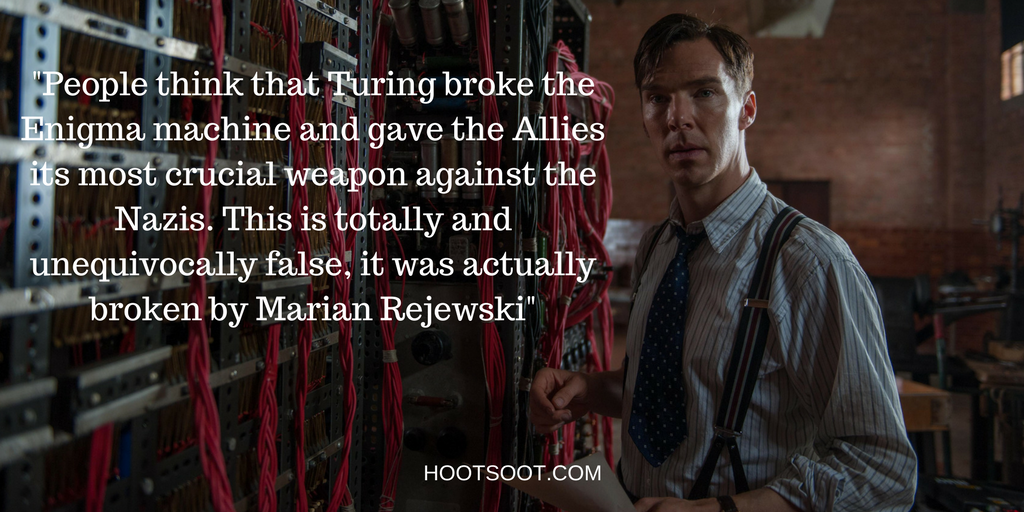 The Enigma Machine of Nazi Germany remained what it’s name suggests– a big mystery – for the allies. It was almost impossible to decode it until Alan Turing came. But if we believe a Quora post, it is actually a myth that Alan Turing was the first individual to break the Enigma Machine. It was first broken by Marian Rejewski at a Polish Bureau. Rejewski and his colleagues undertook great life threatening risks to deliver secrets to the allies when world war 2nd was going on.

People like cryptologist Jerzy Rozycki were captured by the Nazis and tortured. The Poles shared these secrets after Germans breached the German-Poles Non Aggression Pact in 1939.

These people are the unsung heroes who not only were instrumental in helping break the enigma machine but also laid down their lives. Alan Turing wouldn’t have been able to break enigma machine without the sustained efforts of these valiant Poles.

“People think that Turing broke the Enigma machine and gave the Allies its most crucial weapon against the Nazis. This is totally and unequivocally false, it was actually broken by Marian Rejewski at the Polish Biuro Szyfrów all the way back in 1932. But that’s not all, he and many of his colleagues barely escaped with their lives through occupied Europe to deliver their secret to their French and British allies as WWII was raging.

Some, such as cryptologist Jerzy Różycki were not so lucky and were killed; others like Maksymilian Ciężki were captured and were systematically tortured and deported to concentration camps without ever revealing their secret.

The Poles decided to share their secret not long after the Germans cancelled the German–Polish Non-Aggression Pact in April 1939, at a cryptography conference in Warsaw in July 1939. In fact the Poles proceeded to deliver Enigma copies to the French and British the following month. A month later in September 1939, the Germans and Russians jointly invaded Poland and started WWII.

These people didn’t just break the Enigma machine before Turing, they actually gave their lives so that Turing and the British government had this information and to keep this information secret (incredibly, they had also managed to crack Soviet cryptography). What Turing did was devise the Bombe a more effective way of cracking Enigma than the previous Polish Bomba device built in 1938. While no slouch and while he did contribute to the ongoing cracking of Enigma, he had no role in the initial discovery of the technique, nor did he display (nor did he need to display) any of the heroism that led to this discovery getting to Britain and to protect this secret widely acknowledged to have been crucial to victory over the Nazis.”

Women, the other : Deconstructing sexual violence