After Gauri Lankesh, a prominent journalist based in Bengaluru, was shot outside her home, Union Law Minister Ravi Shankar Prasad on Wednesday took to Twitter to condemn the right-wing Hindutva supporters act of celebrating the gruesome murder of the journalist.

The woman was shot dead by three bullets in Bangalore on Tuesday who edited her own Kannada weekly.

Taking the matter to Twitter, Prasad wrote , ““I strongly condemn & deplore the messages on social media expressing happiness on the dastardly murder of #Gaurilankesh”.

While in another Tweet he read, “Expressing happiness on the killing of anyone is shameful, regrettable and totally against Indian traditions. Social media is not for that.”

I strongly condemn & deplore the messages on social media expressing happiness on the dastardly murder of #Gaurilankesh.

Expressing happiness on the killing of anyone is shameful, regrettable and totally against Indian traditions. Social media is not for that.

I expect that Karnataka police will soon nab the killers of #GauriLakesh at the earliest at take action against them.

Gauri Shankar had been a fierce critic of the Hindutva organisations and their divisive politics. As if on cue, right-wing activists started justifying or even celebrating her killing.

There has been a series of tweets on social media, either glorifying the merciless murder or rejoicing on the death of the left-inclined scribe.

So, Commy Gauri Lankesh has been murdered mercilessly. Your deeds always come back to haunt you, they say. Amen.#Bengaluru#GauriLankesh

The very mindset that she endorsed. She always hailed naxal terrorists. If you live by gun, you will die by gun.

The top comment on the ToI article on #gaurilankesh's murder illustrates the poison that led to this. Utterly despicable. pic.twitter.com/1w7Hnxa0NF

One of the users Nikhil Dadhich wrote, “One bitch dies a dog’s death and every puppy is crying with pain.” This user is followed on Twitter by Prime Minister Narendra Modi.

Another user on Twitter posted a photo of Gauri Lankesh along side Umar Khalid and Kanhaiyya Kumar and wrote, “Anti nationals always remain close to terrorist, need investigation. She is another user, who has PM Modi on her follower list. 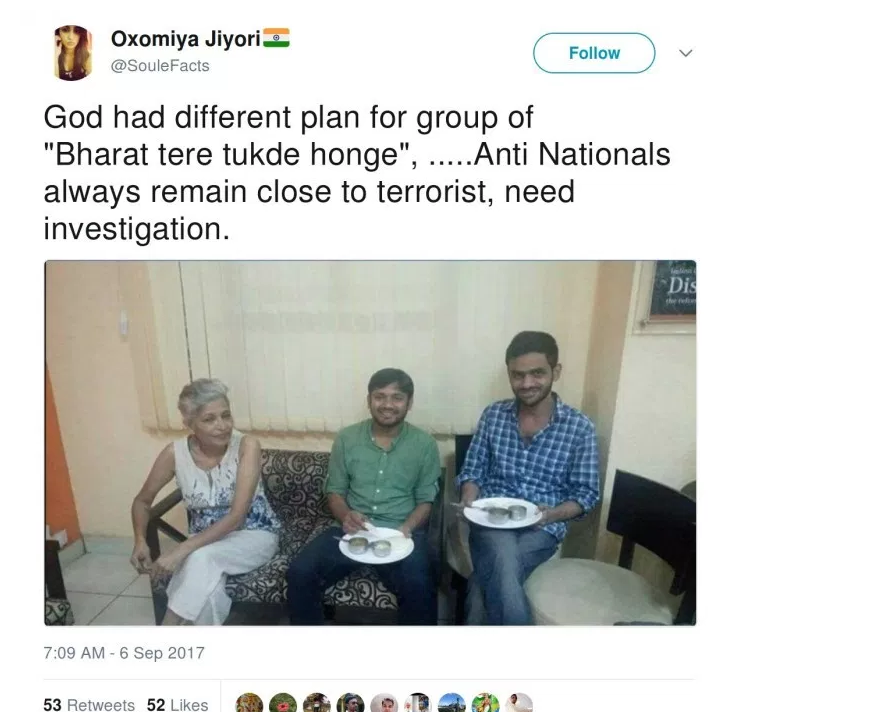 PM Modi has not broken his silence on the assassination as he remains on his foreign tour to China and Myanmar.