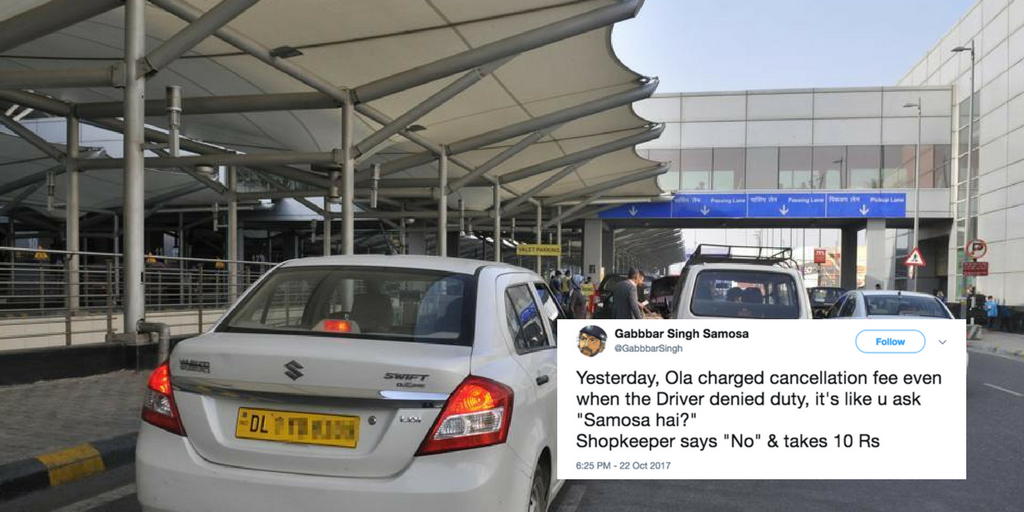 If you use Ola or Uber on regular basis then once in a while, you must have faced unfair cancellation charges out of no fault of yours. Normally, users are forced to shell out Rs 25 to 50 even when the driver denies duty or fails to reach the right location.

Instead of getting angry for being charged the wrong cancellation fees, a man in Gurgaon Tweeted the issue with a scoop of humor. And Ola was quick enough to come up with a witty reply. The incident happened when Abhishek Asthana booked an Ola from the airport to his home but driver canceled the booking and he was forced to pay the cancellation charges. But instead of getting furious, Abhishek posted a funny analogy on Twitter where his handle reads as @GabbarSingh.

He tweeted; “Yesterday, Ola charged cancellation fee even when the driver denied duty, it’s like you ask ‘Samosa hai?’, shopkeeper says ‘No’ and takes Rs 10,”

Yesterday, Ola charged cancellation fee even when the Driver denied duty, it's like u ask "Samosa hai?"
Shopkeeper says "No" & takes 10 Rs

But Ola was quick to win the confidence of its customer again with a witty Tweet.

Charges reversed and sorry for the trouble. Now, where do we send the samosas?

And the cab aggregator ensured that hot Samosas were delivered to the doorstep of Ashish Asthana.

3. And today I rcvd these at my door step. Well played @Olacabs 🙂 pic.twitter.com/3iRxv73gLf

Under-14 yoga team gets no beds to sleep, survive on just a paratha for an entire day