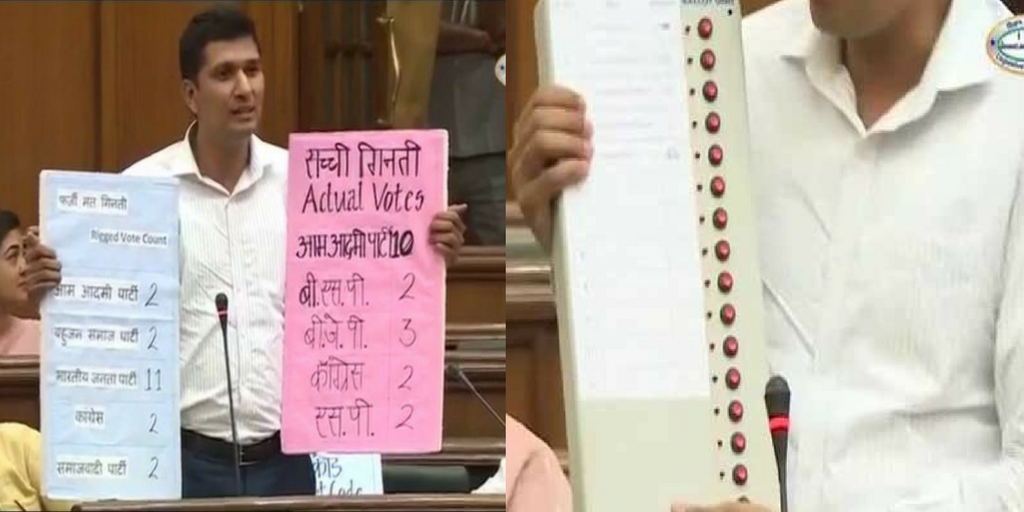 A massive political storm has been created by AAPs mock demonstration inside Delhi Assembly that EVMs can be hacked. This rouses curiosity, apprehension, surprise, mild annoyance and fills us with dread and suspicion. Are we entering Orwellian dystopia 1984?

It seems ominous and baleful for the stability and healthy functioning of Indian democracy and the credibility and integrity of ECI( Election Commission of India), the most robustly impartial institution of India that supervises and monitors the elections in the world’s largest democratic nation, which in itself is no less than an arduous and uphill task.

It is not for the first time that there has been the criticism of EVMs by political parties. Even when the EVMs were introduced most political parties were opposed to it, on the ground that it can be tampered with, is not safe, and even developed countries like USA and Germany do not trust EVMs and prefer the traditional paper ballet over it.

However, the western countries rejecting EVMs vis-á-vis paper ballots is no proof of either the qualitative inferiority of EVMs or they are being not safe and secure. EVMs are being used in Indian elections since 1999 and they do offer many advantages over paper ballot, most prominent being:

* Reduces wastage of paper by tons.

Despite these aforementioned advantages and very strict secrecy about EVMs, a cloud of suspicion has always hovered over them since 1999, when they were first introduced in Indian elections.

Clamour to go back to the paper ballot have been made time and again. But today’s successful tampering and hacking demonstration by AAP MLA Saurabh Bharadwaj, who is a software engineer by profession, greatly astonishes us, goes against even the most hard-wired confirmation bias and compels us to pause and rethink.

Mr. Bharadwaj said all machines made by man can be tampered and made to malfunction. This is especially true of digital machines which can be totally reconfigured by coding and a set of programs. This statement of Mr. Bharadwaj is quite plausible and can not be refuted.

Bharadwaj said that motherboard of EVM can be reprogrammed and it can be made to display the desired outcome, irrespective of the votes. This, he claims, is done by using a secret code.

AAP is blaming EVM tampering by BJP for its unexpected loss in Punjab and Goa assembly elections and Delhi Municipal elections. Though Kapil Mishra, an ex-MLA who has leveled allegations of corruption against Arvind Kejriwal, and Kumar Vishwas, AAP National Convenor, have strongly denied that EVMs were responsible for the party’s loss. This may intensify further infighting in AAP.

BJP has termed it a cheap theatric and an attention seeking tactic on the part of AAP and criticized the party for disrespecting both the people’s mandate and also the ECI.

Amidst this high-pitched political skirmish where salvos were fired swiftly, one after the other, by all sides, ECI has categorically refuted all allegations and said that a replica machine or a prototype model of EVM is not the same as original EVM.

ECI said that hacking a replica does not prove anything and any EVM which is out of ECI premises is not used in elections. AAP was given a stern warning that if it comes to notice that EVM was stolen from ECI godown then disciplinary actions will be initiated against AAP.

Also to dispel rumors and allay fear regarding EVMs, ECI has called for an all-party meeting on 12th May after which it will organize an open Hackathon, where a representative from all political parties will be given an opportunity to hack the EVM.

ECI has thrown the gauntlet to AAP to hack the machine at Hackathon. The ball is in AAPs court now. Let us all wait for the dust to settle and patiently look at both sides of the coin for now. Everything will become crystal clear once the date of Hackathon is announced.